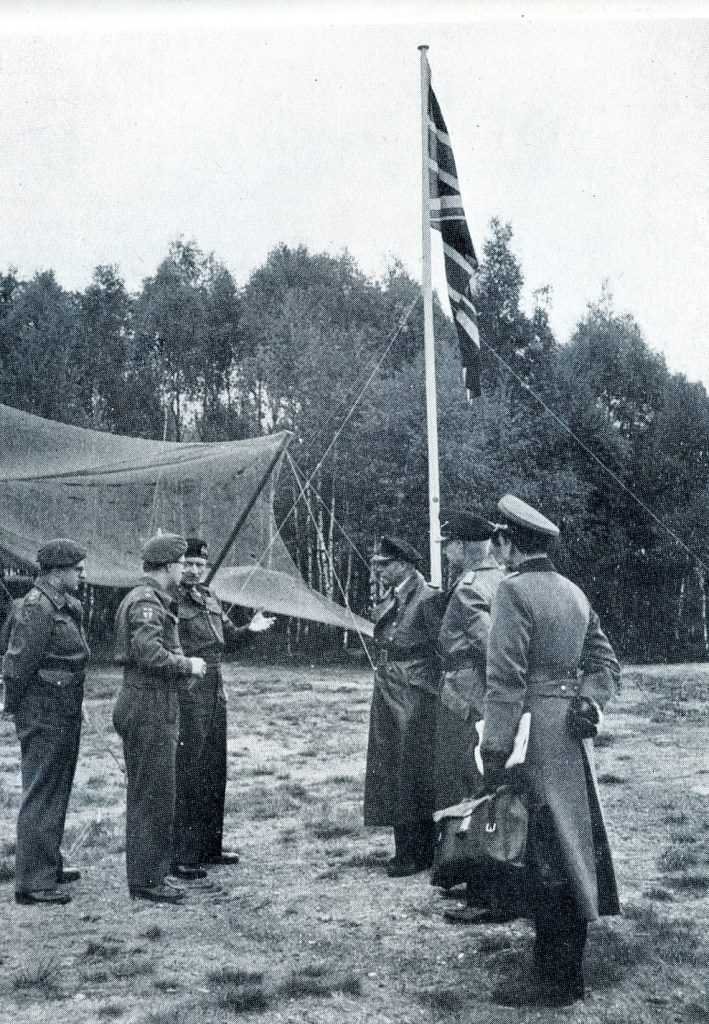 This week will be the 75th anniversary of VE (Victory in Europe ) Day.  On the 8th May 1945, from the balcony of the Ministry of Health building, Prime Minister Winston Churchill said in his speech, ‘My dear friends , this is your hour.  This is not victory of a party or of any class.  It’s a victory of the great British nation as a whole.’  Millions of people celebrated that Germany had surrendered, street parties, parades and thanksgiving services were hastily organised and the 8th May was declared a National Holiday. Of course it was not a joyous day for everyone, it would have served as a reminder of all who had been lost during the war and would not be home to celebrate with their loved ones.

For those who were serving, the news that the end of the war was in sight came through piece by piece over the radio as recorded in The King’s Royal Rifle Corps Chronicle 1945 –

‘Every wave-length on the wireless was dominated by Radio Hamburg to the exclusion of every other station, but much major news kept coming through; first the death of Hitler and the fall of Berlin; then the reported comings and goings of Himmler with surrender offers; and then the surrender of the Germans on the Italian Front to Field-Marshal Alexander, and finally the surrender of Hamburg…..’

However, their work was far from over, as described in the Oxfordshire and Buckinghamshire Light Infantry War Chronicle 1944-45 –

‘The official end of the war in Europe on 8th May was greeted loudly with a lordly exhibition of fireworks, flares, lights and bonfires, but it came as rather an anti-climax inasmuch as…..everybody was immersed in a flood of administrative problems.’

Although Germany had surrendered to the Allies, former regiments of The Royal Green Jackets still remained in Europe, clearing up after the devastation of war.