The temporary exhibition “Women and the Regiment – Military Lives of Victorian Wives” opened on 21st May in the Kincaid Gallery of The Royal Green Jackets (Rifles) Museum.  The exhibition features a dress worn by Barbara FitzHenry, the wife of William FitzHenry who served in the 60th Rifles in India. 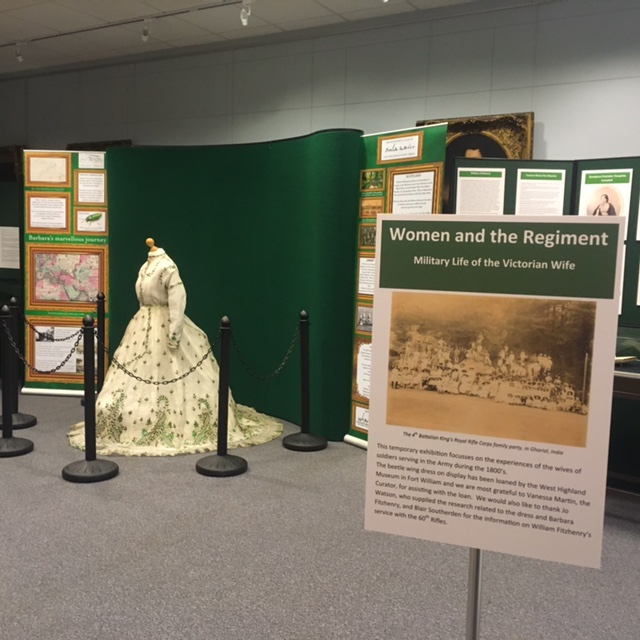 Women and the Regiment

In 1853 Barbara moved to Jersey where she had married and had a child; her daughter Elizabeth Morrison Le Sauteur was born on 25th October 1853 but sadly, she died in May 1855 aged 17 months. A second daughter was born in February of that year and named Henrietta. Barbara’s husband is recorded on the baptism records as having the occupation Aubergister, or inn-keeper. Further sadness was to befall Barbara in October 1856 when her husband died, aged 40 years, of pneumonia.

William FitzHenry enlisted into the army in 1847 joining the 2nd Battalion of the 60th Rifles as a private soldier. In that year the battalion was stationed in Dublin and would have recruited locally. He remained as a private for seven years until April 1855 when, due to the outbreak of the Crimean war a decision was taken to raise a third battalion of the regiment in Ireland. On 15th April 1855 eight sergeants and 530 rank and file were transferred from the 2nd to the new 3rd Battalion to form a cadre: FitzHenry was part of that cadre and on the same day he was promoted to corporal and promoted again to sergeant. The battalion moved from Dublin to the Curragh where they spent an uneventful 12 months before being reorganised into 8 Service and 4 Depot companies prior to foreign service. The Service companies went to India in August 1857 but the Depot companies had moved to Jersey for a period, before joining the 1st Battalion Depot companies at Chatham; subsequently moving on to Colchester and finally to Winchester in 1859. FitzHenry was promoted colour sergeant  on 1 May 1856 and while the companies were on Jersey, FitzHenry met and married Barbara Le Sauteur on 12th December 1856 at St Helier on the island.

The timeline of events described above show that within six weeks of being widowed, Barbara and William FitzHenry had married, suggesting the fragility of her economic affairs and the need to find a husband who would provide financial support for herself and her child. However, the posting to Jersey was relatively short and the depot companies moved to Chatham and subsequently Colchester, before moving to Winchester in 1859. The Service companies had remained at Dublin but in May 1857 were put on notice to move to India for duty at Madras (Chennai) which they reached after a short stay in Calcutta (Kolkata) in December of that year. The census records of 1861 show that the FitzHenry family remained in Winchester with the depot companies: they had six children, but sadly three died young before reaching the age of two years and were buried in West Hill cemetery, Winchester. 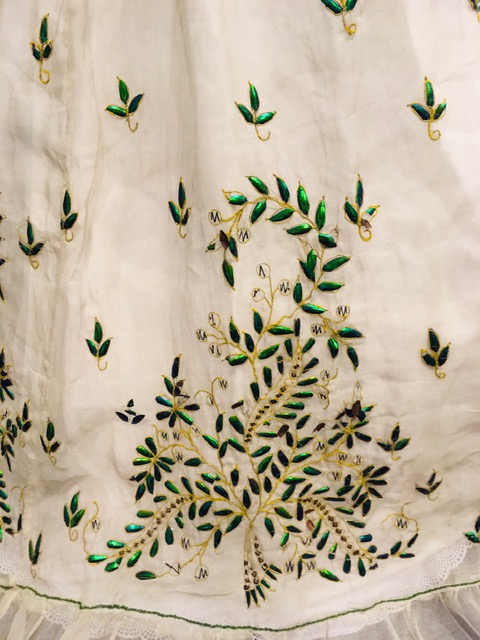 Close-up of Barbara’s dress which is decorated with beetle wings.

The dress on display is unusual in that it is decorated with beetle wings, which was tradition in Mughal textiles. Barbara’s dress is also unusual in the fact that it is the only known example of such a dress belonging to a working class person.

The dress is on loan from the West Highland Museum in Fort William.  The Museum is most grateful for the help and assistance of Vanessa Martin, the curator, for the loan.

The exhibition also features the journals of Constance Collins and Lady FitzMaurice recalling their experiences of life with the Regiment.

The exhibition continues through to 29th August 2022.