This photograph from the Museum archives shows the Base Hospital Camp at Ladysmith some time between the start of the South African War on 11 October 1899 and the end of the year. 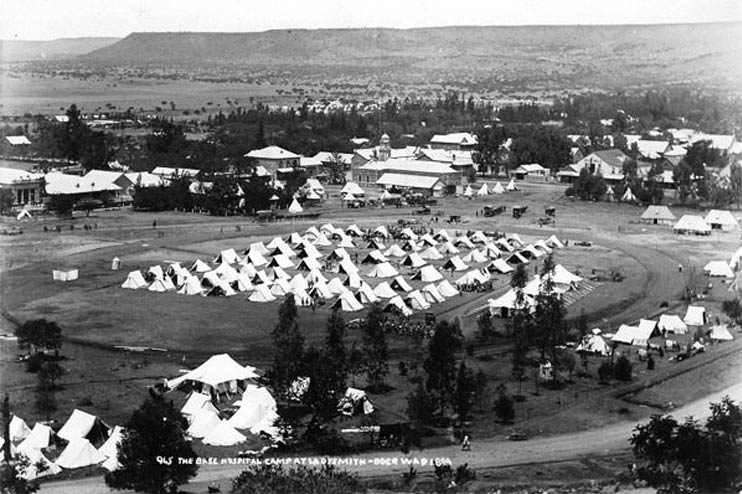 Additional to the hospital site it indicates the nature of the landscape, the buildings at Ladysmith and their dispersion, and of the hills surrounding the town which were occupied by the Boers during their encirclement of the town between 30 October 1899 and 28 February 1900.

A second photograph from the archives shows British troops entering Ladysmith after a failed attempt by the British to dislodge the Boers from Lombard’s Kop on 30 October, a battle during which the British suffered 1,700 casualties and which is described in The King’s Royal Rifle Corps Annals as a fiasco. 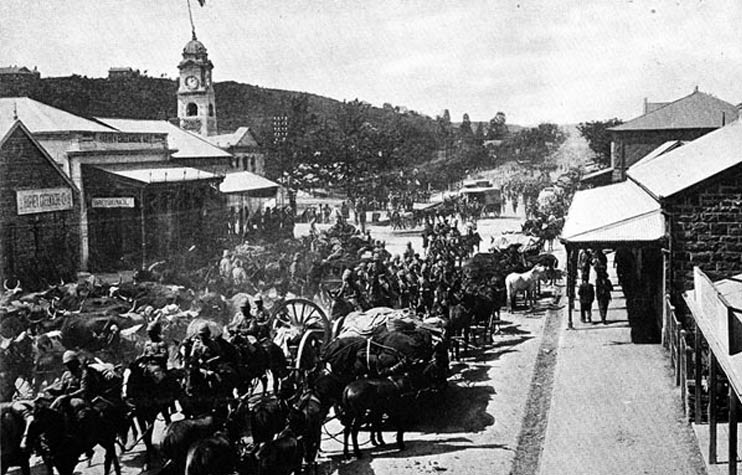 The 1st and 2nd Battalion, The King’s Royal Rifle Corps (KRRC), and the 2nd Battalion, The Rifle Brigade (RB), were among the British garrison of 13,500 troops, under the command of Sir George White, who defended Ladysmith during its encirclement by the Boers who had a force, at its height, of 23,000 men. There were also 5,400 civilians plus a further 2,400 black Africans and Indians living within the 12½ miles of the British defensive perimeter overlooked by the Boers.

Initially supplies were considered ample for at least a couple of months. The sick, however, soon outnumbered the wounded with both placed in the hospital which the Boers chivalrously agreed to treat as neutral ground.

As the siege lengthened, the sick list continued to grow and rations started to run out. By the end of January 1900 there were 1,900 sick and wounded in the hospital, of whom 848 were typhoid cases and 472 were dysentery. The death rate rose to eight per day. Horsemeat had long taken the place of beef and on 9 February the biscuit ration was halved.

On 28 February the first troops from General Sir Redvers Buller’s relief column entered Ladysmith, after fighting several battles against the Boers in the preceding three months, Colenso, Spion Kop, Vaal Krantz and Hart’s Hill among them. The siege was over. The relief column included 3 KRRC, 1 RB and a Rifle Reserve Battalion made up of reinforcements intended for 1 and 2 KRRC and 2 RB at Ladysmith.

The encirclement and defence of Ladysmith had lasted 118 days, with 170 of the British garrison killed and nearly 400 soldiers and civilians dying of disease, mostly typhoid.