This photograph shows members of 13 Platoon, 3rd Green Jackets (The Rifle Brigade), at Balai Ringin in the First Division of Sarawak (Borneo) in 1965. The platoon, formed entirely of buglers, storemen and other personnel from Headquarters Company, had just returned from an operation in the forward area. The platoon commander, 2nd Lieutenant Robert Pasley-Taylor, is third from the left without a jungle hat, and the platoon sergeant, Sergeant Fisher, is third from the right. The platoon was armed with American automatic 223 Armalite rifles. 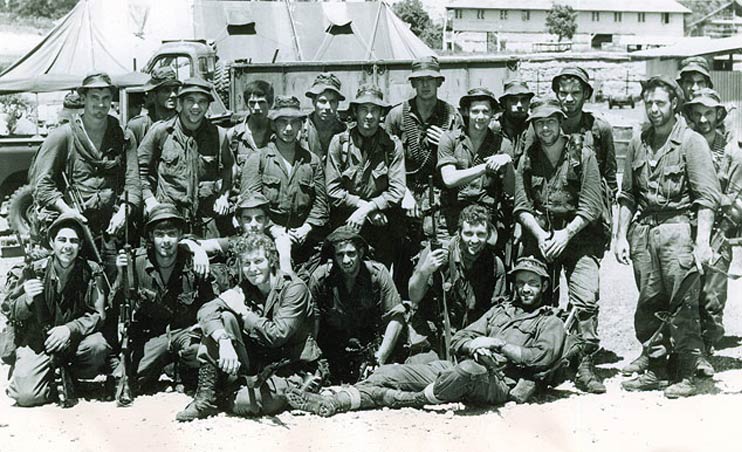 3rd Green Jackets (The Rifle Brigade), commanded by Lieutenant-Colonel Mark Bond, was despatched from UK on a 12-month unaccompanied tour to the Far East in January 1965. After 6 months’ preparatory training in Hong Kong and at the Jungle Warfare School at Kota Tinggi in Johore, West Malaysia, the Battalion deployed to the First Division of Sarawak (Borneo) in East Malaysia in July 1965. Here it was engaged in operations against Indonesia in a conflict known as ‘Indonesian Confrontation’.

The Battalion formed a part of West Brigade (formerly 99 Gurkha Infantry Brigade). Battalion Headquarters was at Balai Ringin, 60 miles by road east of Kuching, the capital of Sarawak. A and B Companies occupied forward bases at Nibong and Gunan Gajak respectively, through which the platoons of all companies rotated on patrol operations.

After a name change to 3rd Battalion, The Royal Green Jackets (The Rifle Brigade), on 1 January 1966, the Battalion was relieved by the 1st Battalion, The Durham Light Infantry, on 2 January, returning to UK, via a stop-over in Singapore, two weeks later.