This photograph from the Museum archives features 1st Battalion, Queen Victoria’s Rifles (QVR), a TA regiment affiliated to The King’s Royal Rifle Corps, training as a motor-cycle reconnaissance battalion in the New Forest near Beaulieu in 1939. 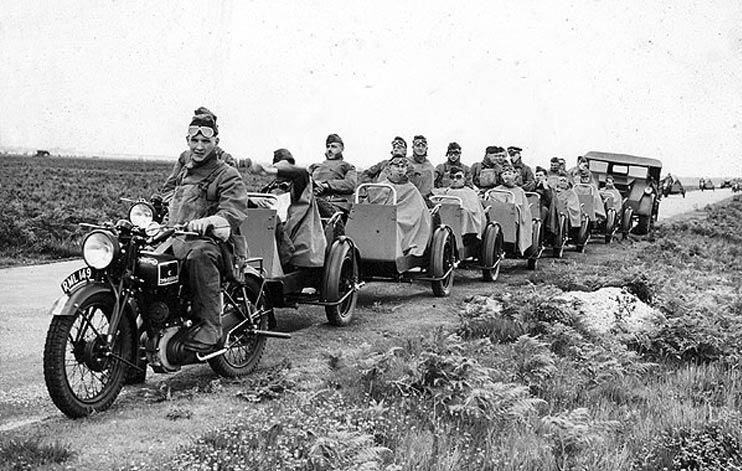 The Battalion comprised three motor-cycle companies, each armed with ten Bren guns and the men with pistols instead of rifles. At the outbreak of the war the Battalion was the divisional reconnaissance battalion of the 1st London Division responsible for Home Defence in and around London.

In March 1940 the Battalion was warned for early service overseas and on 20 April became a part of the newly-formed 30 Infantry Brigade under the command of Brigadier Claude Nicholson. When the Brigade was sent to defend Calais on 22 May 1940, it deployed without its motor-cycles and most of its other equipment. After a tenacious fight, nearly all the 550 members of the Battalion were killed, wounded or taken prisoner when the troops defending the town were forced to surrender to the Germans on 26 May.

Queen Victoria’s Rifles (QVR) enjoyed one of the longest, unbroken histories of any voluntary corps, deriving from the Duke of Cumberland’s Sharpshooters, formed as riflemen during the threat of Napoleonic invasion in 1803. When other volunteers were disbanded in 1814, they continued as a uniformed rifle club and in 1903 King Edward VII recognised the Regiment’s centenary by a private inspection at Buckingham Palace.

In 1835 Princess (later Queen) Victoria’s patronage was signified in the title and successively the St George’s and Bloomsbury Rifles were incorporated. In 1890 the QVR established its headquarters at 56 Davies Street near Berkeley Square entirely at the expense of the Regiment on land made available by the generosity of the Duke of Westminster.

In 1908 the QVR became a part of the new Territorial Force and designated the 9th (County of London) Battalion (Queen Victoria’s Rifles), The London Regiment, fighting with distinction in France and Belgium during the First World War. In 1916 the formal affiliation with the KRRC which had been removed in 1908 was restored.

In 1939 the QVR formed a second battalion which, together with the first, were re-titled in 1941 the 7th and 8th Battalion (Queen Victoria’s Rifles) KRRC.