This photograph of mounted infantry is recorded in the Museum’s archives as being of ‘B Company, 1st Battalion, The Rifle Brigade, Mounted Infantry, Myingyan, Upper Burma, 1888’. The reference to the mounted infantry being a part of B Company is so far unverified. The remaining detail is almost certainly correct with Myingyan situated to the south of Mandalay in Upper Burma. 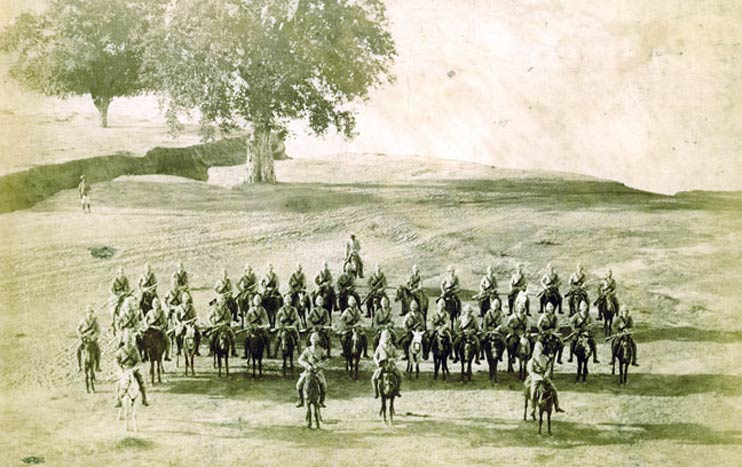 In 1885 the British became concerned about the burgeoning relations between the French and King Thebaw of (Upper) Burma and feared French intrusion in an area the British considered to be within their sphere of influence. On 8 November 1885, under the pretext of accusing the Burmese of interfering in the Bombay Burmah Trading Company’s timber trade in Upper Burma, the British declared war on Burma – the Third (and final) Anglo/Burmese War. Although King Thebaw was soon obliged to surrender, his brother continued to harness resistance against the British. In October 1886 1 RB was among reinforcements sent from India.

1 RB included a mounted infantry element of possibly company strength within the Battalion. Details are scant as Cope’s History of The Rifle Brigade ceased to record the Regiment’s history beyond 1876 and the first Rifle Brigade Chronicle did not appear until 1890. It is clear, though, that the mounted infantry company took a leading part in operations against the dissident Burmese in Upper Burma who were generally referred to at the time as “dacoits”.

In December 1 RB was relieved in Burma by the 4th Battalion, The Rifle Brigade (4 RB) which arrived at Rangoon on board the Indian Marine Troopship Canning. On 13/14 December 1888 the majority of 1 RB embarked at Rangoon on board the Canning arriving at Calcutta on 19 December. Three companies of the Battalion (‘A’, ‘C’ and ‘I’) with a party of mounted infantry remained in Burma to take part with 4 RB and others in a punitive expedition with the Karen Field Force to East Karenni. These companies embarked on board the Indian Marine Troopship Enterprise at Rangoon on 5 March 1889, arriving at Calcutta on 9 March. On arrival in India the Battalion was stationed at Bareilly, 150 miles east of Delhi. 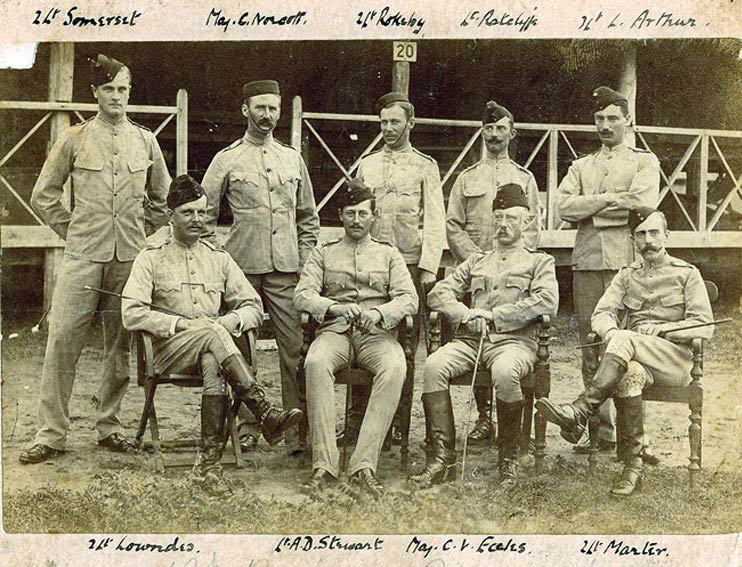 A second picture in the archives shows a group of nine officers from 1 RB in Burma in 1888, five of whom took part in the East Karen Expedition. Interestingly and sadly, three of them died within two years. Lieutenant R.A.F. (Richard) Marter died of enteric fever at Moradabad on 7 August 1989; Major C.V. (Charles) Eccles, the Battalion Second-in-Command, died of enteric fever at Bareilly on 21 February 1890; and 2nd Lieutenant E.W.H. (Edward) Somerset died of an abscess of the liver at Bareilly on 20 March 1890. 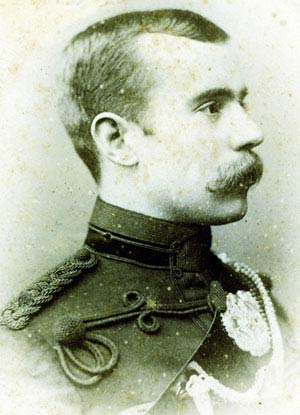 A portrait photograph of Lieutenant Marter is one of many such photographs in the archives.

On 2 April 1890 a memorial brass was unveiled in Winchester Cathedral to the memory of the three officers and 130 NCOs and men of 1 RB who were killed or died in service in Burma between October 1886 and March 1889.