This photograph has been extracted from the 1914 King’s Royal Rifle Corps Chronicle. It shows the officers of the 2nd Battalion stationed at Blackdown, near Aldershot, on the eve of their departure to France with the British Expeditionary Force. 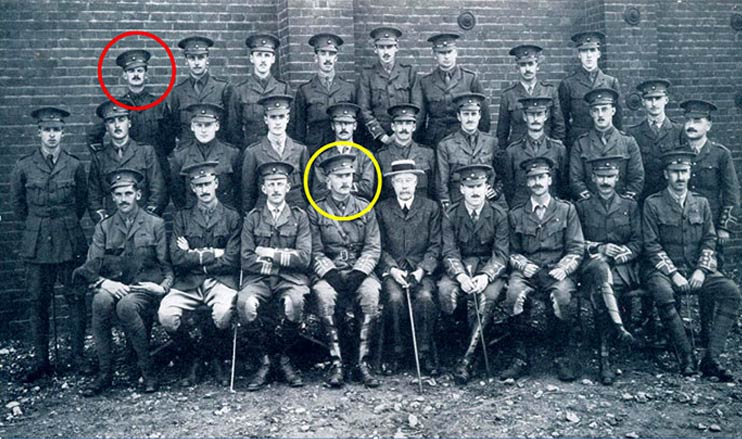 The photograph was one of a number taken in the late afternoon of 11 August 1914 after HM King George V had passed through the barracks. Included among the other photographs was one of the 182 officers, NCOs and Riflemen who had served with the Battalion in the South African War (1899-1902).

This particular photograph has especial poignancy since by the end of 1914 of the 27 officers in the photograph, seven had been killed, twelve wounded and three were prisoners of war.

The commanding officer of the Battalion, Lieutenant-Colonel E.P. Serocold (ringed in yellow), was one of those wounded. So, too, was Lieutenant J.H.S. Dimmer (ringed in red) who by the end of the year had been awarded a Military Cross and a Victoria Cross.