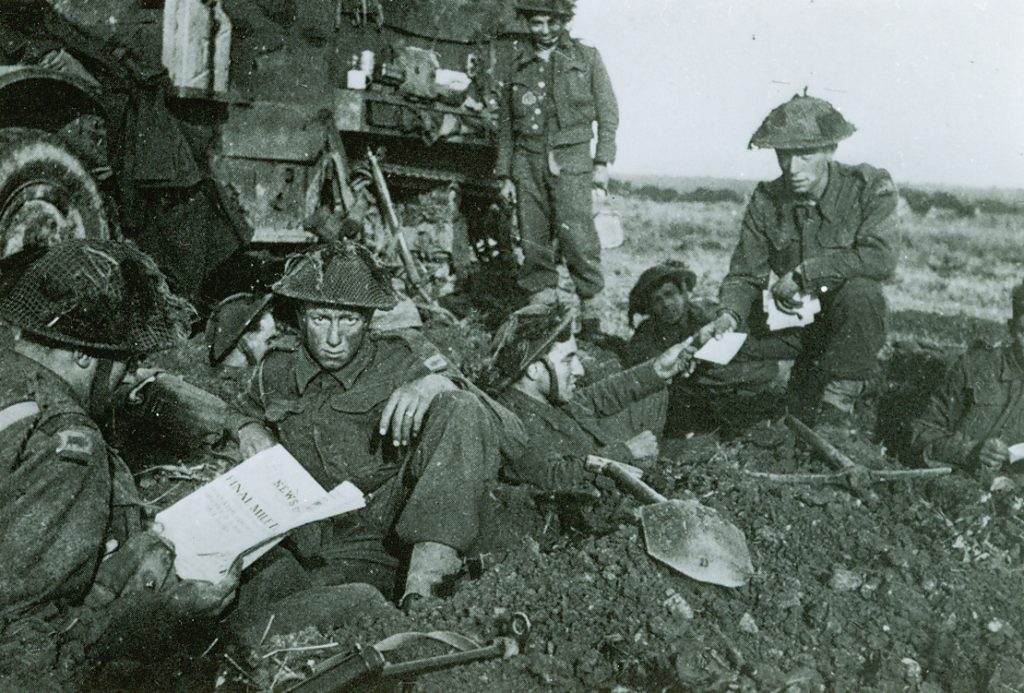 This photograph of Riflemen relaxing was taken in 1944 near Hill 112 East of Villers Bocage in Northern France.  The image shows men serving with 8RB (8th Battalion Rifle Brigade) receiving post and catching up on the news from home.  To the rear of the picture is a half track.  8RB was one of two Rifle Brigade motor battalions (the other 1RB) that took part  D Day Operations.

1RB landed in France as part of the 7th Armoured Division on 8 June 1944 (D Day +2) and were soon in action.  On the 12 June the battalion took part in a quick armoured thrust inland to Villers Bocage.  Initial progress was good but on the 13 June the leading regimental group, including A Company 1RB, encountered enemy tanks in close country and suffered heavy casualties.  Although strong German counter-attacks were held, the position was too exposed and the Brigade withdrew overnight on 14 June, 1RB taking over a sector of some 2,500 yards of front near Caumont.

8RB, the motor battalion of 11th Armoured Division, landed a few days later and on 26 June took part in Operation Epsom, an ambitious plan to cross the River Odon east of Caen and take high ground between the Odon and the River Orne.  8RB were directed on Hill 112, the dominating feature, but despite heavy and gallant fighting in which they suffered serious losses, they were unable to hold the hill.  In subsequent fighting over several weeks it became clear that neither side could hold Hill 112.  The Battalion was then withdrawn into reserve.