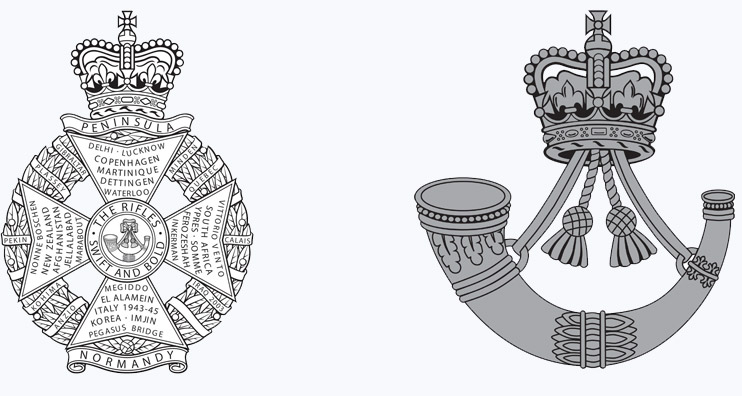 In 2007 the order of battle of the British Army was changed. The end of the Cold War in 1989 removed the need for a standing army in Germany of the size required to act as a deterrent to any attack on the West by the Warsaw Pact. A Defence Review resulted in a down sizing and reorganisation of the three Services, Navy, Army and Air Force; for the land forces the changes were set out in a paper entitled ‘Future Army Structure’.

The Rifles embrace the traditions and Heritage of their founding Regiments whilst remaining a Rifle Regiment. They wear rifle green and black buttons; they follow rifle drill and march at rifle regiment pace of 140; they do not carry colours and their battle honours are worn on their belt buckles and the cross belt badges of Warrant Officers and Officers; the Bugle is used in barracks to mark routine events and to summon individuals.

Just as in 1966 when The Royal Green Jackets were formed so in 2007 elements of The Rifles were deployed on operations; operational tours in Iraq and Afghanistan dominated the first six years of the Regiments life.

Continuing the traditions and ethos

The Rifles carry on the traditions and ethos associated with Rifle Regiments in the British army that are summed up in the following quote from the UK ‘Army’ website.

“Riflemen are distinct from the rest of the British Army. The Regiment’s officers and soldiers alike are ‘Riflemen’; bound together into a close-knit brotherhood shaped by a common ethos, characteristics and experiences. Riflemen draw greatest satisfaction from their excellence on the battlefield, take pride in their shooting and fitness, wear rifle green uniforms with black buttons, march faster than the rest of the British Army and enjoy an atmosphere of relaxed, self-discipline, rather than the blind discipline more commonly associated with military life.”

The Rifles Collection, recounting their history from formation to the present day, is housed alongside the Royal Green Jacket Museum on the ground floor.