About the Peninsula Barracks site

Home > About the Peninsula Barracks site

On the historic site, on which The Royal Green Jackets Museum stands, William the Conqueror built a royal castle (1067), which was extended by King Henry III (1216-72). The castle was besieged by Oliver Cromwell during the English Civil War (1645) and, after its occupants had surrendered, was partially demolished in 1651.

In 1683 King Charles II chose the site for a palace overlooking Winchester Cathedral. The palace was designed in the manner of Versailles by Sir Christopher Wren, but, following King Charles II’s death (1685), it was never completed.

In the 18th century the palace, known as The King’s House and in an increasingly neglected state, was used to accommodate French, Spanish and Dutch prisoners captured during the Seven Years’ War (1756-63) and the American War of Independence (1775-83).

The Kings House, centre left, with Winchester Cathedral in the middle distance, 1838.

In 1796 the site was leased from the Crown for use as a military barracks. Thereafter:

1796-1856: The barracks housed 3,000 troops during the Napoleonic Wars and numerous regiments temporarily between 1815 and 1856, including the 43rd Light Infantry and the 60th Rifles (King’s Royal Rifle Corps).

1839: The main railway line from London to Southampton on the western boundary of the barracks was opened with a platform available for use by the troops in the barracks.

1856: The 2nd Battalion, The Rifle Brigade, arrived from Portsmouth.

1858: The barracks became the home base and training depot of The King’s Royal Rifle Corps (KRRC) and The Rifle Brigade (RB).

1872: The barracks was officially titled The Rifle Depot.

1894: The King’s House was destroyed by fire. The depot was closed and the troops moved to Gosport while the barracks were rebuilt.

1899: The Prince of Wales (later King Edward VII) laid the foundation stone for the new barracks.

1904: The Rifle Depot re-opened with The King’s House re-built in similar style to Wren’s original design.

1914: At the outbreak of the First World War 5,000 reservists were mobilised, clothed, equipped, armed and posted to their regiments in five days. Subsequently 30,000 volunteers destined for service in the KRRC and RB passed through the gates of The Rifle Depot by the end of September 1914.

1939: At the outbreak of the Second World War so many recruits came forward to join the KRRC and RB that it became necessary for the KRRC recruits to be trained at Bushfield Camp, two miles outside Winchester.

1943-4: The barracks were vacated by The Rifle Depot and used to house the 60th Infantry Regiment of the 9th (US) Infantry Division which was preparing to take part in the 1944 D Day landings in Normandy. RB recruits were trained near York. 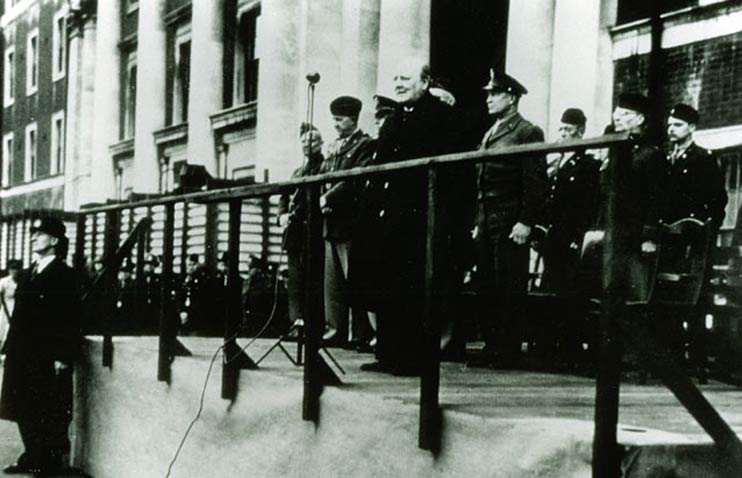 Churchill addressing US troops at The Rifle Depot, 1944.

After the war recruit training resumed at The Rifle Depot.

Between 1961 and 1964 the Depot moved to Bushfield Camp while the barracks were modernised.

1986: After completion of a new barracks at Flowerdown on the outskirts of Winchester (Andover Road), the barracks ceased to be used as a training depot.

1994: The Ministry of Defence relinquished its occupation of most of the site for private residential use, with the area of the former parade ground landscaped and renamed Peninsula Square. Three buildings were retained to accommodate some MOD offices, including the Regimental Headquarters of The Royal Green Jackets, and Winchester’s Military Museums.

Today the site continues to accommodate some MOD offices, including the Regimental Headquarters of The Rifles, and Winchester’s Military Museums. Peninsula Square with its smart houses and landscaped gardens is also one of the most desirable places to live in Winchester.