Object of the month

Home > Object of the month 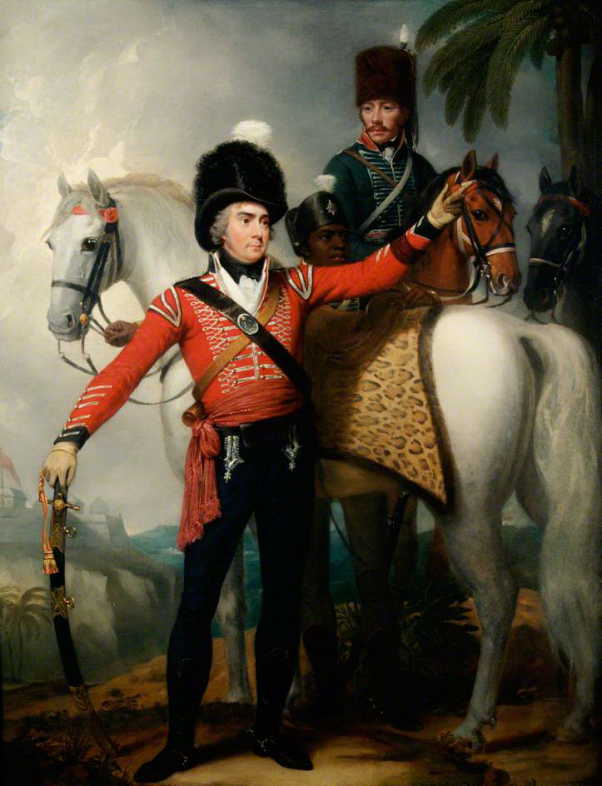 The Royal Green Jackets (Rifles) Museum at Winchester has in it’s collection two full length portraits of Major General Coote Manningham (1765-1809) and his brother Lieutenant Colonel Boyd Manningham (1766-1797).  They were received from descendants of these two brothers by The rifle brigade Museum on 1956.  Framed, they are apparently unsigned and undated.

Coote Manningham served in several regiments during his career but in 1797 he was serving in the rank of lieutenant colonel, as Adjutant general to general Forbes in the Leeward Islands of the West Indies, based on Sant Domingo, now known as Haiti.  Whilst serving on this island he contracted yellow fever and was also wounded in an ambuscade in December 1795.  he returned to the UK in 1798 with dispatches.  He was appointed an ADC to George III and subsequently became an Equerry.  In 1800 he was appointed the first Colonel of the Rifle Corps, subsequently 95th Regiment (Rifles) and from 1816 The Rifle Brigade. His brother was commanding the 81st (South Lincolnshire) regiment on the same island, where he died and is “under the flagstaff” at the fortress of cape Nicholas Mole.

The two pictures appear to represent these officers in a landscape of a Caribbean island, but unusually for the probable dates of the painting, the main subject of the picture is ‘supported’ by two soldiers of the West Indies.  Coote Manningham’s portrait depicts a mounted soldier, possibly of mixed race, in a green uniform with red facings; perhaps a ranger of Chasseur of an island militia or a French emigré soldier of as yet unidentified unit.  The second soldier is a black African in a similarly unidentified green uniform but wearing tan trousers and short riding boots with spurs .  He is holding the reins of Coote Manningham’s horse and is perhaps his groom.

The portrait of Boyd Manningham also has two West Indian soldiers.  One is clearly modelled by the same person who is the ‘groom’ in the Coote Manningham picture.  The second figure illustrates a sergeant in the West India Regiment wearing a scarlet jacket and holding a halberd.

We are seeking to identify the artist of these two pictures and would be particularly interested to hear from any other museum that may have portraits representing service in the West Indies during the period 1793-1815 or with West Indian soldiers as part of the composition.