This object is the splendid Victoria Cross brooch on display in the Museum which once belonged to Mrs Woodroffe, the mother of 2nd Lieutenant Sidney Woodroffe of The Rifle Brigade, aged 19, who was awarded a posthumous VC for conspicuous bravery at Hooge on 30 July 1915. 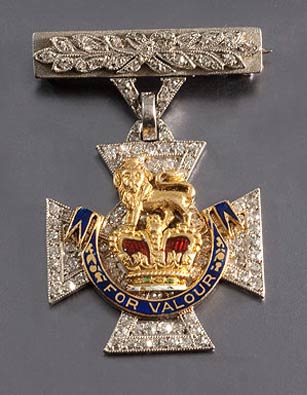 Sidney Woodroffe was educated at Marlborough College and commissioned in The Rifle Brigade on 23 December 1914. He accompanied the 8th (Service) Battalion, The Rifle Brigade (8 RB), to France in May 1915 as a platoon commander in A Company.

His VC citation describes his act of gallantry:

The enemy having broken through the centre of our front trenches, consequent on the use of burning liquids, this Officer’s position was heavily attacked with bombs from the flank and subsequently from the rear, but he managed to defend his post until all his bombs were exhausted, and then skilfully withdrew his remaining men. This very gallant Officer immediately led his party forward in a counter-attack under an intense rifle and machine-gun fire, and was killed while in the act of cutting the wire obstacles in the open. (London Gazette, 6 September 1915)

Woodroffe’s commanding officer later wrote to Woodroffe’s father describing his son as ‘simply one of the bravest of the brave … He risked his life for others right through the day and finally gave it for the sake of his men.’ 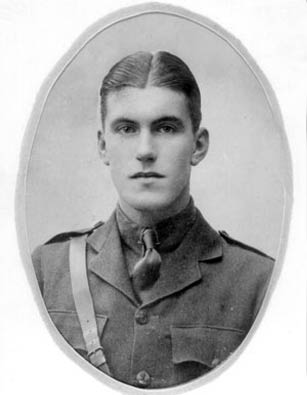 Sidney Woodroffe had two older brothers who, like him, were educated at Marlborough and joined The Rifle Brigade. Kenneth, the eldest, was killed at Neuve Chapelle on 9 May 1915, while attached to the 2nd Battalion, The Welsh Regiment. Leslie, the middle brother, served with Sidney in 8 RB and was severely wounded at Hooge. He later recovered from his wounds, returning to France on 1 June 1916. On the day of his return he was wounded again and died in hospital on 4 June 1916.

The pain to the parents of all three sons being killed in action in a little over a year can only be imagined and the grief too awful to contemplate. It is unsurprising therefore that Mrs Woodroffe should have acquired such an elegant VC brooch as a visible sign of her son’s gallantry.

Woodroffe’s parents received their son’s VC at an investiture by King George V at Buckingham Palace on 29 November 1916. The VC was sold privately to Lord Ashcroft in 2001 and is on display in the Ashcroft Gallery of the Imperial War Museum in London.

2nd Lieutenant Woodroffe has no known grave but is commemorated on the Menin Gate.

Reference: Focus on Courage: The 59 Victoria Crosses of The Royal Green Jackets by Lieutenant-General Sir Christopher Wallace and Major Ron Cassidy, published in 2006 and on sale in the Museum shop, price £20.