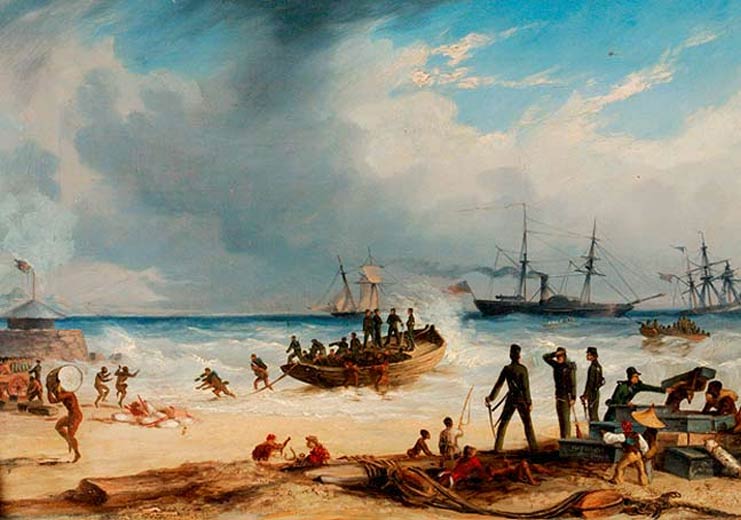 This object is one of five paintings by Thomas Baines (1820-75) of scenes relating to the activities of the 1st Battalion, The Rifle Brigade, en route to and during the Third Kaffir War in the Cape Colony (South Africa) in 1852. This particular painting bears the title ‘Landing in Surf at Algoa Bay, Cape of Good Hope, 30 March 1852’.

The Third Kaffir War in the Cape Colony began in December 1850 when the native chiefs reacted adversely to attempts by the Governor, Lieutenant-General Sir Harry Smith, a Rifle Brigade veteran from the Peninsular War and Waterloo, to curb their powers. After a fresh outbreak of trouble in autumn 1851, Sir Harry called for reinforcements from UK.

On 17 December 1851, 1st Battalion, The Rifle Brigade (1 RB), stationed at Dover, was warned for service in the Cape Colony. On 2 January 1852 the whole battalion of 700 officers and men, under the command of Colonel George Buller CB, with 18 women and 29 children, embarked on HM Steamship Megaera, an iron screw troop ship. ‘Nothing,’ according to the Regimental History, ‘could exceed the discomfort of this wretched ship’. One of the other Baines paintings owned by the Museum, titled ‘The Battalion Embarks at Dover on HM Steamship Magaera (sic) on 2 January 1852’, shows shows members of 1 RB on the quayside during embarkation.

After a series of gales and fires on board, the Megaera eventually made it to Simon’s Bay (Cape Town), via Madeira and Sierra Leone, on 24 March. This occasioned much relief as on 26 February 1852 HM Troopship Birkenhead had been wrecked off Danger Point and there was much concern for the fate of the Megaera.

On 27 March, the Megaera, having disembarked the women and children, sailed from Cape Town and on 30 March anchored in Algoa Bay (Port Elizabeth). 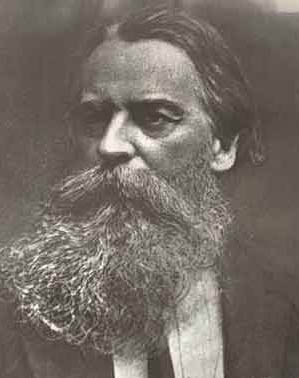 (John) Thomas Baines (right) was based in Cape Town and covered the Third Kaffir War as an official war artist for the British Army. He captured the scene during 1 RB’s landing at Algoa Bay, although, as with the painting of the embarkation at Dover, most probably retrospectively.

As the Algoa Bay painting shows, 1 RB was landed ashore by means of surf boats and the help of the native population who were referred to at that time as ‘Fingoes’. HM Steamship Megaera is clearly visible in the bay with smoke coming from her funnel.

After landing, 1 RB encamped on the hill above Port Elizabeth where the Battalion prepared to move ‘up country’ which it did on 2 April.

In early 1853 the Third Kaffir War came to an end. I RB remained in Cape Colony until the end of the year eventually arriving back in England in January 1854.

As a postscript, on 19 June 1871 HM Steamship Megaera was run ashore in a sinking state but without loss of life on St Paul’s Island, half-way between Cape Town and Western Australia. 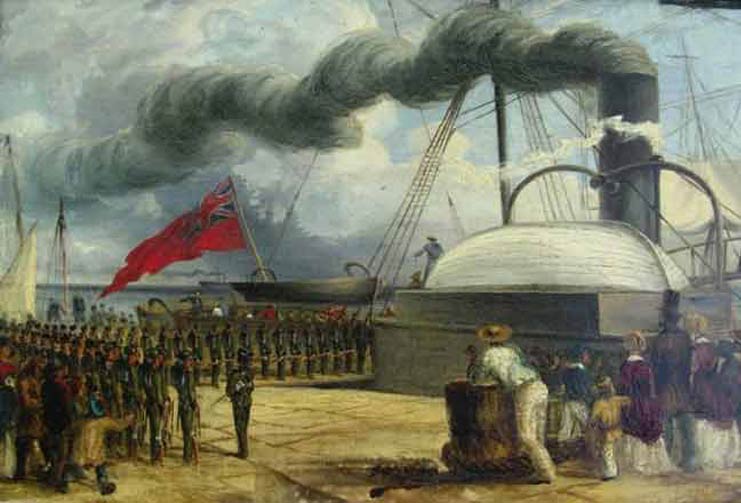 The Battalion Embarks at Dover on HM Steamship Magaera (sic) on 2 January 1852.