This object from the Museum collection is a superb presentation sword gifted to Lt-Col Norman M’Leod by the NCOs of 3rd/ 95th Rifles in 1809. The sword bears the inscription:

Presented to Lt-Col M’Leod by the Non-Commissioned Officers of the Third Battalion 95th Rifle Regiment as a Testimony of High Respect and Esteem to him as the Commanding Officer, 1809.

The sword has recently been restored to its present pristine state by Sue Bickerton, an accredited conservator.

In 1806 Major M’Leod commanded a wing of five companies from 1st/95th Rifles, under the overall command of Brigadier-General Robert Craufurd, en route to South America. After a prolonged voyage the troops arrived off Monte Video in June 1807, soon afterwards taking part in Lieutenant-General Whitelocke’s disastrous expedition to capture Buenos Aires.

M’Leod was noted for his gallantry during the expedition to Buenos Aires. However, the five companies of 1st/95th were among those forced to surrender on 5 July, with M’Leod listed as slightly wounded.

On 7 July Whitelocke concluded a treaty for the release of his troops on condition they left the country immediately. By January 1808, M’Leod and his five companies were reunited with the rest of 1st/95th at Colchester.

M’Leod again commanded a wing of five companies of 1st/95th Rifles that disembarked at Corunna on 26 October 1808 and marched to join, on 20 December, the other five companies of the 1st/95th that were already in the Peninsula under command of Lieutenant-Colonel Sydney Beckwith.

The Battalion formed a part of Sir John Moore’s force that advanced into Spain before being obliged to retreat to Corunna and sail for England in January 1809. M’Leod was made a Companion of the Order of the Bath (CB) for his services in Spain.

On 4 May 1809 M’Leod was promoted to Lieutenant-Colonel and appointed to command the newly-formed 3rd/95th Rifles stationed at Brabourn Lees. Here, the training of the Battalion was carried out with such vigour that three companies were ready to be sent to Cadiz in early 1810. On 29 March 1810, on being warned for service in the Peninsula, M’Leod exchanged command of 3rd/95th with Lieutenant-Colonel Andrew Barnard of 1st Regiment (Royal Scots).

M’Leod became a Major-General on 22 July 1830. He was subsequently one of around 80 passengers and crew who lost their lives during the night of 16/17 March 1831 when the paddle steamer Frolic, on a voyage from Haverfordwest to Bristol, foundered and sank during a violent storm off the Welsh coast.

Although only in command of 3rd/95th Rifles for a short period, it is clear that M’Leod had already established a fine reputation in the 95th Rifles and that the presentation sword he received in 1809 was well deserved. 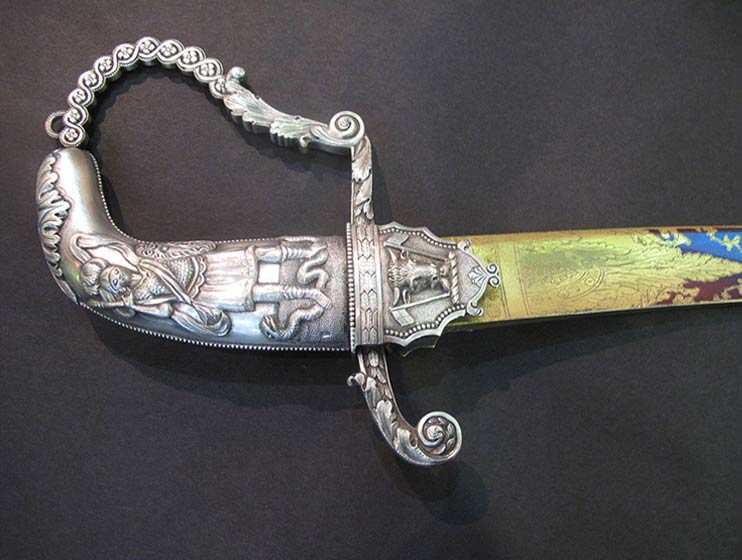