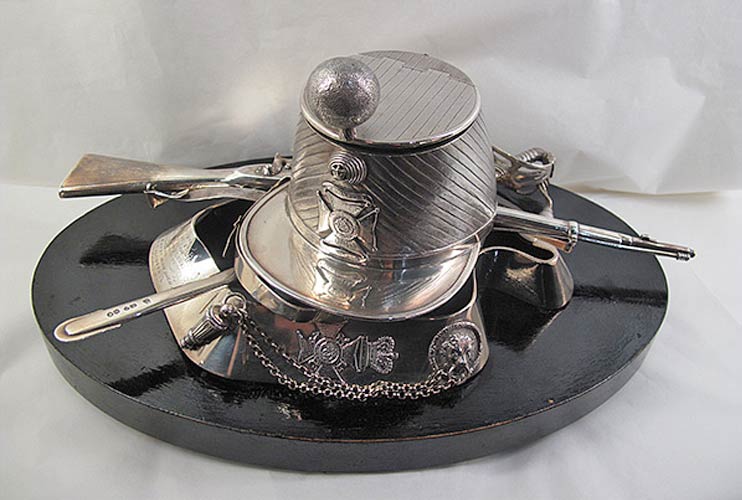 This splendid silver snuff box on display in the Museum dates back to the period 1868, and shows four iconic items of particular significance to the 60th Rifles, The King’s Royal Rifle Corps, as the Regiment was titled at the time. They are an officer’s cross belt, an officer’s pattern regimental sword, a rifle and a regimental shako with a boss by which the lid to the snuff box was opened.

The snuff box is engraved with the words: ‘Presented to Lieutenant-Colonel Palmer CB and the officers of 2nd Battalion, 60th Rifles by Caroline Jessy Gosling in gratitude for their kindness to her son, Charles Gosling, Lieutenant in the same Battalion, who died at Fort William, Calcutta, 29 June 1868, aged 27 years.’

Lieutenant Charles Gosling was gazetted an ensign in the 60th Rifles on 14 May 1858, becoming a Lieutenant on 15 June 1861. On 14 September 1867 he embarked with the 2nd Battalion at Queenstown, Ireland, on board HMS Crocodile en route to India.

Quoting from the Regimental Annals: ‘It will be remembered that at this period the Suez Canal did not exist, but the Battalion, by arrangement with the Khedive of Egypt, proceeded by what was termed the New Overland Route, being the first regiment to take advantage of it. Alexandria was reached on September 27; the troops disembarked and reached Suez by train, where they embarked on HMS Euphrates, which sailed on October 4. The ship stopped at Aden and Trincomalee [Ceylon], and seems to have reached Fort William, Calcutta, on the 29th.’

The Battalion spent most of 1868 in Calcutta before moving up-country to Seetapore and Benares at the end of the year. The cause of the unfortunate Lieutenant Charles Gosling’s death at Fort William on 29 June 1868 is not known, but will almost certainly have been due to disease.

The Battalion remained in India until1881 before deploying to South Africa where it arrived too late to play a major part in the First Boer War.