A silver matchbox holder with a King’s Royal Rifle Corps crest on the topside which belonged to Lieutenant-Colonel R G Buchanan-Riddell, who was killed during the South African War by a sniper after successfully leading 3rd Battalion KRRC in a successful assault on the Boer positions at Twin Peaks on 24 January 1900.

The underside of the matchbox holder is engraved with the words “R.B.R. from L.G. and A.R. April 1895”. Research has so far failed to reveal who L.G. and A.R. were. There is no indication from the Roll of Officers in the Regiment that they were contemporaries of Buchanan-Riddell. They may have been family members. Another possibility is that they were members of the 4th West Kent London Rifle Volunteers, with which Buchanan-Riddell served as Adjutant from May 1890 to May 1895, and that the matchbox was presented to him in an act of friendship on his relinquishment of the appointment.

The Museum Trustees are indebted to Captain R S (Bob) Ferrand, a former officer in the KRRC, for donating his grandfather’s matchbox holder to the Museum Trust. The Museum already has on display Buchanan-Riddell’s Queen’s South Africa Medal 1899-1901 with clasps ‘Cape Colony’ and ‘Relief of Ladysmith’, and his regimental silver cross-belt fittings. 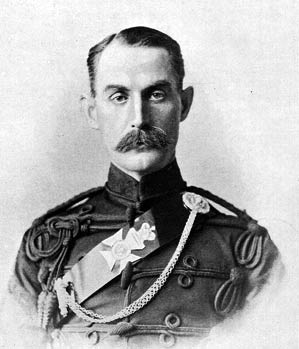 Robert George Buchanan-Riddell was born on 15 September 1854 and educated at Eton. On leaving Eton he joined the West Kent Militia. He was commissioned in The King’s Royal Rifle Corps (60th Rifles) on 20 November 1875 and posted to the 4th Battalion, accompanying the Battalion to India in the following year.

On 1 July 1899 Buchanan-Riddell was appointed to command 1st Battalion KRRC but exchanged to 3rd Battalion KRRC which was stationed in Ireland. In October 1899 the Battalion formed part of the second wave of reinforcements sent to South Africa, arriving at Durban on 28 November. It subsequently was present, under Lieutenant-Colonel Buchanan-Riddell’s command, at the Battle of Colenso (15 December) and at all the operations prior to and including the Battle of Spion Kop and Twin Peaks on 24 January 1900. 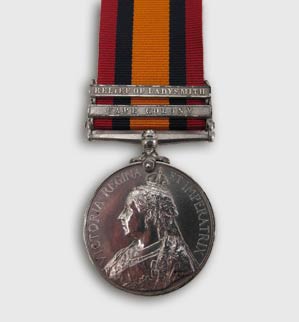 Buchanan-Riddell was the second commanding officer in the Regiment to be killed at the head of his Battalion in the opening months of the South African War; the other was Lieutenant-Colonel R H Gunning, commanding 1st Battalion KRRC, who was killed at the Battle of Talana Hill on 20 October 1899.

In the obituary which appeared in the 1901 KRRC Chronicle it was written of Buchanan-Riddell that: ‘a better, kinder man never breathed. A good sportsmen and a good fellow, his memory will live long in the hearts of the friends he left behind. Enemies he had none.’

Buchanan-Riddell was married in 1896 and, on his death, left a widow and two daughters.