This silver communion set was used by the Reverend Lumley Green-Wilkinson when he was chaplain to the 41st Infantry Brigade in the 14th (Light) Division during the Division’s occupation of the trench line in the Ypres salient in mid-1915. The communion set was subsequently used to administer communion to His Majesty King George V during his convalescence from a lung operation at Craigweil House, Aldwick, near Bognor, Sussex, in 1929. 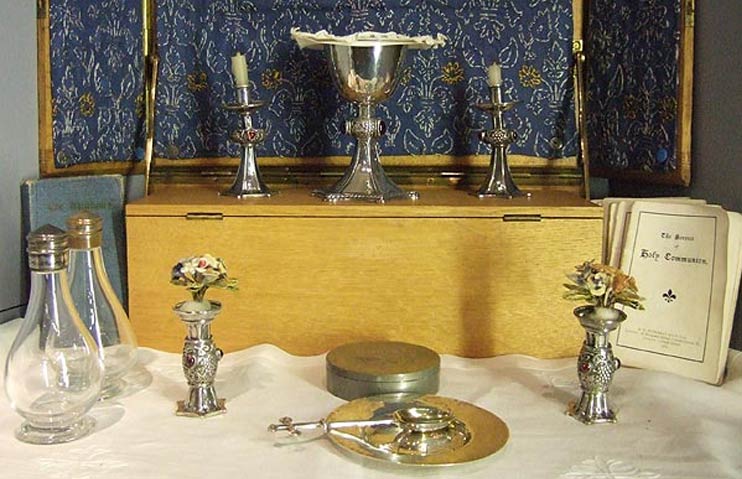 The chalice is inscribed on the base:

Ypres Salient 1915 France 1916: From this chalice the Archbishop of Canterbury administered the Blessed Sacrament to King George V after his illness Easter 1929 at Craigweil House Bognor

The rim of the chalice is engraved with the words:

The identity of the donor of the chalice, ‘C.G.S.’, is not known. The Latin words ‘Omar Ramsden et Alwyn Carr me fecerunt’ indicate that the chalice was the work of the silversmiths, Omar Ramsden (1873-1939) and Alwyn Carr (1890-1940), who worked in partnership in London between 1898 and 1918. From 1905 onwards they engraved their work with these Latin words. 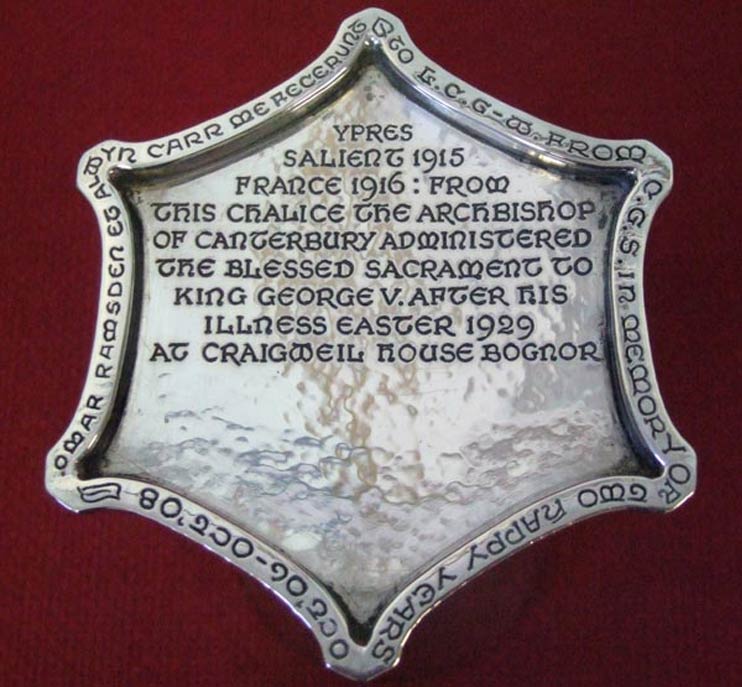 In 1928 King George V became ill and lung surgery was carried out on 12 December. His recovery was slow, so arrangements were made for him to convalesce at Craigweil House, Aldwick, near Bognor, Sussex, courtesy of the owner, Sir Arthur Du Cros, Bt. 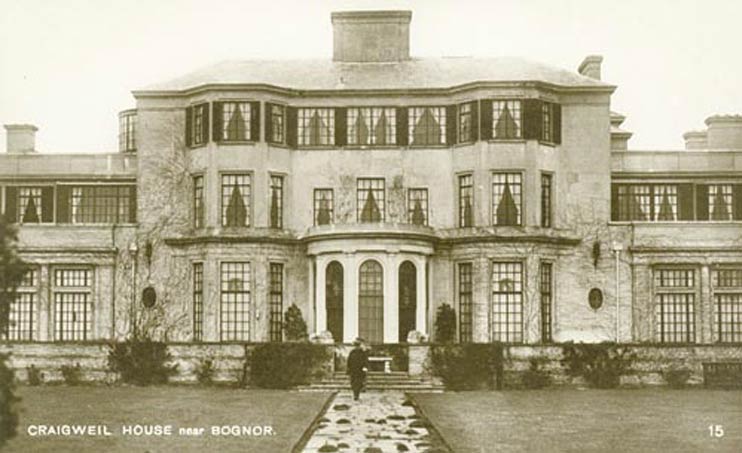 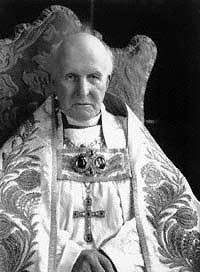 On 9 February 1929 the King travelled to Craigweil House to join his wife, Her Majesty Queen Mary, who had arrived before him. The King was joined in convalescence by Dr. Lang who, during his early months as Archbishop of Canterbury, was also unwell.

On Sunday 31 March 1929, Easter Day, the Archbishop used the portable communion set of his private, unpaid chaplain, the Reverend Lumley Green-Wilkinson, to administer communion to the King and Queen at Craigweil House. The inscription on the base of the chalice records the event, which is also mentioned in Cosmo Lang’s entry in the Dictionary of National Biography.

By 15 May the King’s health had recovered sufficiently for him to return to London. Soon afterwards His Majesty granted the District Council use of the title ‘Regis’, thus creating the name by which the town is now known, ‘Bognor Regis’. In 1939 Craigweil House was demolished.

Either before or at the time of his death, Green-Wilkinson’s portable communion set passed into the ownership of his son, Oliver, who was Adjutant of the 2nd Battalion, The King’s Royal Rifle Corps at the Battle of El Alamein in 1942 and was later awarded a Military Cross for his actions in the Western Desert in 1942/3. He was ordained in 1946 and became the Bishop of Northern Rhodesia (Zambia) in 1951 and, additionally, the Archbishop of Central Africa in 1963. He was killed in a car crash on 26 August 1970.

After Bishop Oliver’s death the communion set passed into the ownership of his brother, Major John Green-Wilkinson MBE MC, a former officer in The Rifle Brigade (1941-47), who has kindly loaned it to the Museum. John Green-Wilkinson was awarded a Military Cross for his gallantry as a liaison officer during the capture of Tripoli in January 1943. He later wrote a book about his brother titled Bishop Oliver: Letters and Reminiscences (Wilton 65, 1998). In 2007, aged 85, he received a MBE for community service in Winchester.

The 41st Infantry Brigade consisted of the 7th and 8th Battalion, The King’s Royal Rifle Corps, and the 7th and 8th Battalion, The Rifle Brigade. The Brigade arrived in France in May 1915 just as the Second Battle of Ypres (22 April to 25 May 1915) was drawing to a close. The Brigade immediately assumed responsibility for a part of the trench line in the Ypres salient which in places was no more than 15 feet from the German line.

On 30 July, 7 KRRC and 8 RB were in the front line at Hooge when the Germans attacked with flame-throwers for the first time during the war. All but a few of the trenches occupied by 7 KRRC were overrun. A counter-attack was ordered.

Nothing in First or Second Ypres was more resolute than the counter-attack by [the battalions of the 41st Infantry Brigade] … The ground over which they attacked had not a vestige of cover; the three-quarters of an hour’s preliminary bombardment had been devoid of effect; no one, from the Divisional Commander downwards, could have had any hope of success … but the new battalions went forward as if they were determined to show that when called upon they could give their lives as freely as those whose blood had already soaked the ground for which they were fighting.

7 KRRC and 7 RB lost just over 300 men each, 8 KRRC close to 200 and 8 RB just under 500.
These were men to whom the Brigade’s chaplain, the Reverend Lumley Green-Wilkinson, would have administered communion from his portable communion set in the two months before the Battle of Hooge. The survivors of the battle would also have received communion from the same chalice and plate during the remainder of his time with the 41st Infantry Brigade in France in 1915-16.

It was at Hooge on 31 July that 2nd Lieutenant Sidney Woodroffe, a platoon commander in A Company, 8 RB, carried out the act of gallantry for which he was subsequently awarded a posthumous Victoria Cross.