This small Russian icon depicting Madonna and Child measures 120mm x 60mm was found on the ground following the battle of Inkerman in 1854.  The object is one of several items found on the battlefield that are on display on the first floor of the Museum in the Crimean Section.

The Battle of Inkerman  was part of the Crimean War.  The allied armies of Britain, France and Sardinia and the Ottoman Empire fought against the invasion of the Russians in the Crimean peninsula.    Both the 1st and 2nd Battalions of the Rifle Brigade took part in the action at Inkerman.  Heavy overnight rain easing at dawn on 5th November was replaced by dense mist.  This hid the Russians advancing in a two-pronged assault against the British positions whilst a third force demonstrated against the French  on the Sapouné Heights.

One wing of 2nd Battalion Rifle Brigade having left for Balaclava on the previous day, only three of their companies were present.  Early in the morning these attacked part of Simoinoff’s force on the south side of the Careenage Ravine, driving the Russians down the hill at the point of the sword (bayonet).

1st Battalion Rifle Brigade, meanwhile advancing with the 4th Division on the right flank, reached the Heights of Inkerman where General Pennefather’s 2nd Division were carrying on a brave but unequal fight.  Sir George Cathcart handed over the 1st Battalion saying he had brought him ‘a battalion that could do anything’.  The 1st Battalion immediately deployed forward,  one wing to the head of the Quarry Ravine, the other to Kitspur, both parties being involved in fierce fighting.  Joining forces at the Barrier about noon, the two wings extended skirmishers along the east side of the Quarry Ravine.  Later in the day the 1st Battalion pushed forward to Shell Hill, where a Russian battery had stood, driving the enemy from the ridge. Though the guns had withdrawn, four tumbrils of ammunition were taken.

The 2nd Battalion remained on the left flank on the Victoria Heights, engaging the Russians whenever they came in range and, later in the day, captured a party of enemy sheltering in the Magazine Caves.  Both battalions suffered severely losing between them 37 killed and 72 wounded. 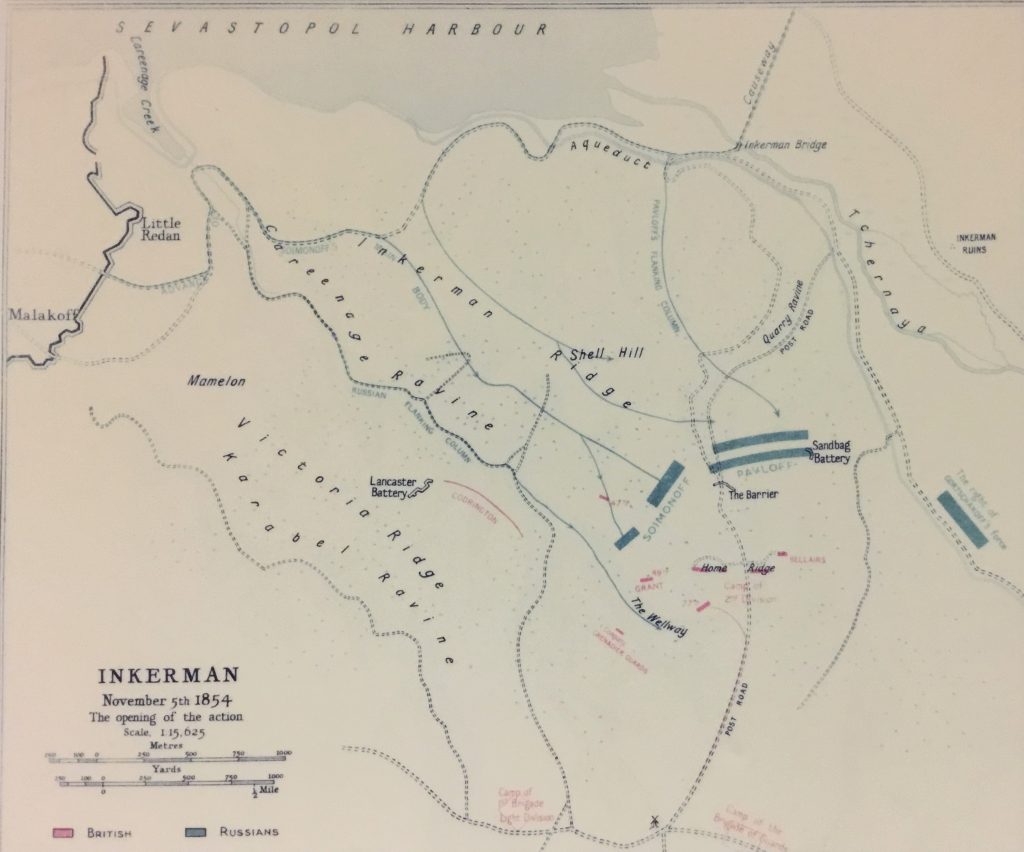 Map showing the area of the Battle of Inkerman 1854