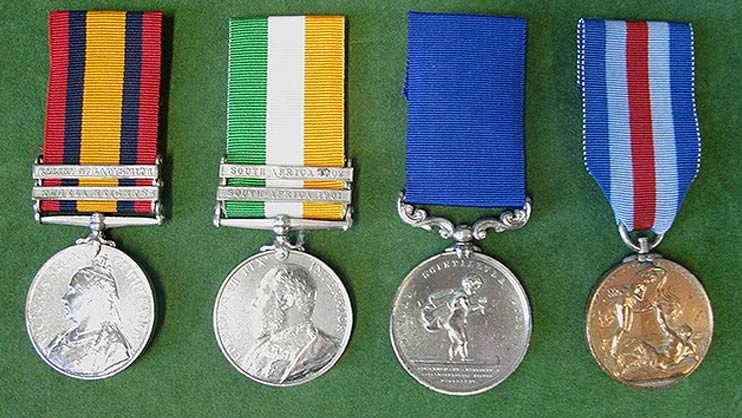 This medal group awarded to Private (Rifleman) L. A. Wootton of 1st Battalion, The King’s Royal Rifle Corps, is unusual in that it includes a Royal Humane Society Silver Medal for saving persons from drowning and a Lloyd’s Medal for Saving Life at Sea. Both medals were awarded for the same incident during the shipwreck of the Royal Indian Marine Ship (RIMS) Warren Hastings on the coastline of Reunion on 14 January 1897.

On 6 January 1897 the troopship RIMS Warren Hastings left Cape Town (South Africa) bound for Mauritius with 993 passengers including the headquarters and four companies of the 1st Battalion, The King’s Royal Rifle Corps.

At 2.20 a.m. on 14 January, the Warren Hastings, eight miles off course, steaming at full speed, in pitch darkness and pouring rain, ran straight into the rocks on the coastline of Réunion. The ship stuck fast, allowing time for the troops to fall in below decks without noise and in perfect order. At 4 a.m. the ship’s captain ordered disembarkation to begin by rope ladders from the bows, intending not to disembark the women and children until daybreak. However, at 4.20 a.m. the ship began to list badly so he ordered the men to stand-fast while the women, children and sick were helped off the ship. Subsequently, as the position of the ship became even more critical, men clambered ashore as best they could, with many being saved from the sea by their comrades. By 5.30 a.m. all the troops were ashore. Later, some of the baggage was recovered. Miraculously, in an incident reflecting great credit on the discipline and behaviour of the troops, only two Indian members of the crew were lost. After being cared for very well by the French at Réunion, the passengers boarded another ship, maybe a trifle nervously, to complete their passage to Mauritius.

The Part Played by Rifleman Wootton

The King’s Royal Rifle Corps Annals record that, during the disembarkation of the RIMS Warren Hasting, a number of persons finished up in the sea and were in danger of drowning. Rifleman Wootton was quick to swim to their assistance and managed to rescue Rifleman G. Taylor and bring him ashore. He subsequently went back into the sea with a buoy to rescue Rifleman Danner who was suffering from exhaustion, and managed to haul him onto the rocks.

Private Wootton was not the only one to save life during the shipwreck of the RIMS Warren Hastings or to be awarded medals for their action, but his is the only medal group in the Museum collection that includes both a Royal Humane Society Silver Medal and a Lloyd’s Medal for Saving Life at Sea.

The Royal Humane Society was founded in 1774 for the specific purpose of spreading knowledge about the techniques of resuscitation and saving life from drowning. Gold, silver and bronze medal were introduced, together with grants and testimonials, for award to those who distinguished themselves saving, or attempting to save, life from drowning. Clasps are awarded for second and subsequent acts of bravery.

The obverse of the medal shows a cherub, nude but for a flowing cloak, blowing on a burnt-out torch. In 1869 the Army and Navy approved the wearing of the medal with a recipient’s other medals. 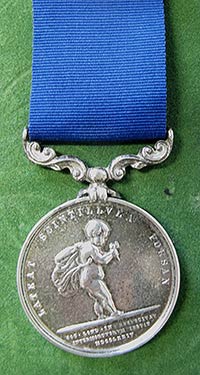 Lloyd’s Medals for Saving Life at Sea, in silver or bronze, were introduced in 1836. The obverse of the medal shows the rescue of Ulysees by Leucothe. In 1896 the Army and Navy approved the wearing of the medal with a recipient’s other medals. 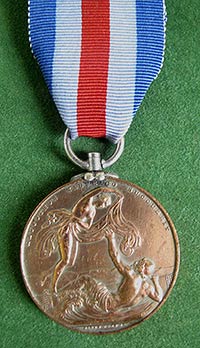 Obverse of the Lloyd’s Medal for Saving Life at Sea.