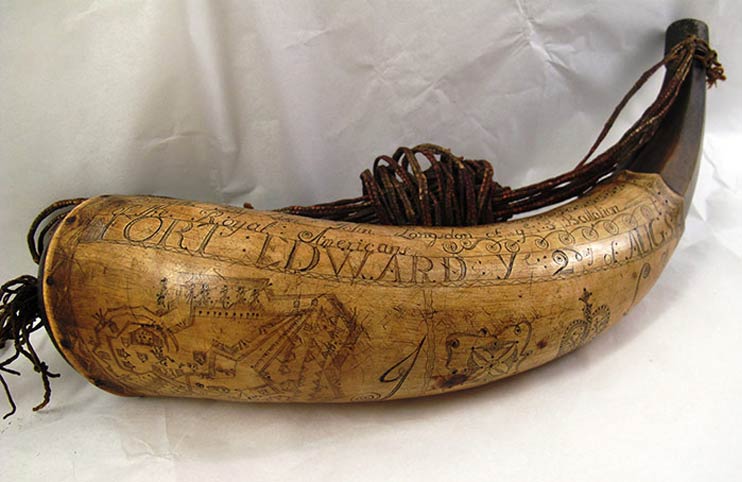 A long side view of the powder-horn showing Lieutenant Longsdon’s name, battalion/regiment and the date 2nd August, but with the year 1757 obscured. The carving is of the layout of Fort Edward.

This object is one of the oldest and most valued items on display in the Museum. It is a powder-horn that once belonged to Lieutenant John Longsdon. The carvings, which were completed in 1757, show the layout of Fort Edward in New York State. There is no other powder-horn comparable in excellence to Longsdon’s in another military museum in this Country except in The Black Watch Regimental Museum (42nd Highlanders) in Perth. 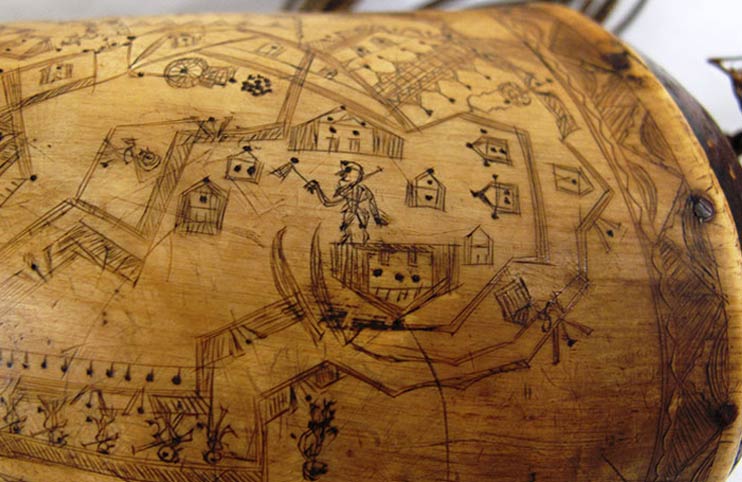 A more detailed look at a proportion of the carving showing how well it has survived the intervening year from 1757 to the present day.

Lieutenant John Longsdon was an early recruit to the 62nd (Royal American) Regiment formed on Christmas Day 1755. He was appointed a senior Lieutenant in the Regiment on 7 January 1756. His service appears to have been short-lived as by 1759 he no longer received a mention in the Army List as an officer in the Regiment which at the end of 1756 was re-titled the 60th (Royal America) Regiment. Research as to his origins pre-1756 and after 1759 has not been carried out. Anyone interested, please contact the curator@rgjmuseu.co.uk

Historically the place where Fort Edward was built was known from as early as 1690 as the ‘great carrying place’ (portage point) between the Hudson River and Lake Champlain, on the direct route inland by boat and foot between New York City and the St. Lawrence River between Montreal and Quebec. It was as important for the French Canadians in the British Wars against the French and Indians in 1757 to deny British access to Canada via this route as it was for the British to force their way through.

A brief history of Fort Edward

1709 – General Francis Nicholson ordered a fort to be built at the ‘great carrying place’. The fort was garrisoned with 450 English, Dutch, and Indians equipped with cannons and mortars.

1731 – John Henry Lydius built a trading post at the ‘great carrying place’. The post was called Fort Lydius by the French and Indians.

1755 – Sir William Johnson sent General Lyman to build a fort at the ‘great carrying Place’ and this was named Fort Lyman. A month later, Sir William Johnson arrived at Fort Lyman and changed the name to Fort Edward, in honour of Edward Augustus, duke of York and Albany. The fort was a three-bastioned, Vauban-style fort, surrounded by a dry moat that was 14’ wide and 8’ deep.

1755-56 – Barracks, blockhouses, guard houses, storehouses and a magazine were built at Fort Edward. Nearby Rogers Island was used by some of the Provincial soldiers as a camp.

1757 – General Daniel Webb was put in charge of the troops at Fort Edward and Fort William Henry a short distance to the north.

July 23, 1757 – Fort Edward was attacked by the French under Marin and about a dozen men were killed.

Aug.-Sept. 1757 – The garrison in Fort Edward was enlarged after the massacre at Fort William Henry. Fort Edward was now the sole northern outpost during the winter of 1757-58. Colonel William Haviland was in charge of the soldiers at Fort Edward and on Rogers Island.

Dec. 25, 1757 – A fire broke out inside one of the barracks in Fort Edward. Soldiers from Rogers Island helped to put out the fire.

1757-1758 – British barracks, Rangers’ huts, a blockhouse and a hospital were built on Rogers Island.

1759 – General Amherst’s army gathered at Fort Edward to prepare for their attack upon Fort Carillon and Crown Point. After the capture of these two forts, the garrison in Fort Edward was greatly reduced.

1766 – Fort Edward was evacuated, and the stores were moved to Crown Point.

1775-1783 – Fort Edward and Rogers Island were occupied by American soldiers during the Revolution, but General John Burgoyne’s army forced them to flee in 1777.

In 1757 200 men of the 3rd/60th (Royal American) Regiment, under commend of Lieutenant-Colonel John Young, was ordered to reinforce the garrison at Fort William Henry which, after a brave defence, was obliged to surrender to a much larger French and Indian force. The Indians then massacred a small group of prisoners from the 3rd/60th and oter regiments, including camp-followers. The 3rd/60th suffered a total loss of about 80 men from death, disease and wounds.

As stated above. the garrison of Fort Edward to the south of Fort William Henry was enlarged after the massacre at Fort William Henry. It is almost certain that Lieutenant John Longsdon was one of the 3rd/60th officers sent there and it was during his stay at Ford Edward that he carved his magnificent powder-horn, including a layout of Fort Edward, which is one of the Museum’s treasured exhibits.

Please visit the Museum, see and admire it for yourself.