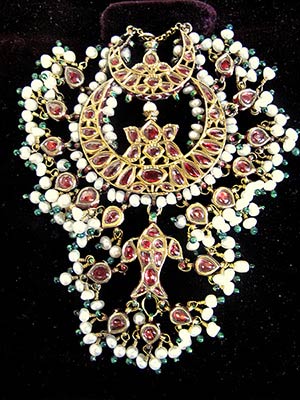 The Pearl Earring once belonging to the queen of Delhi.

This object is a beautiful, oriental pearl earring acquired by Captain Sir Edward Campbell Bt of the 1st/60th Rifles (1822-82) when the jewels belonging to the king and queen of Delhi were auctioned after the recapture of Delhi in September 1857 (during the Indian Mutiny). He gave it to his wife, Georgiana, and subsequently, after her death giving birth to her ninth son and 13th child in 1872, to his eldest daughter, Nancy. The earring has remained in the possession of the family ever since and is presently on loan to the Museum.

One side of the pearl earring – the side in the photograph accompanying this article – features flat rubies with a fringe of seed pearls together with some green beads. The other side of the earring – not shown – features flat cut diamonds. There are also touches of garnets. There is a clasp at the top of the ear-ring as this is the only earring, presumably of two worn by the queen of Delhi, which Sir Edward acquired. It was later adapted to hang from a necklace as a pendant. 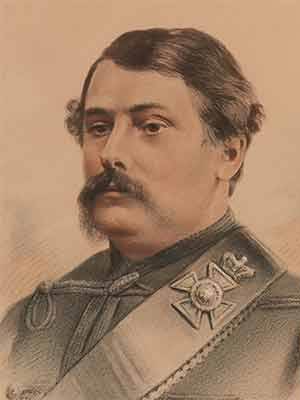 Captain Sir Edward Campbell Bt was in a unique position to acquire the earring as, in advance of the assault on Delhi on 14 September 1857, he was appointed by popular vote to be the prize agent ‘in charge of the legalised looting of the captured city’ [1]. He clearly thought the earring was an appropriate present for his wife and purchased it at auction, almost certainly at considerably less than its true value. Some payment, however, would have been necessary as the proceeds of the auction sales achieved by him as a prize agent were divided up among the participants in the recapture of Delhi, according to rank. He also held a position of responsibility, for which he was accountable, and needed to be seen to be acting fairly.

Georgiana Metcalfe, most probably before her marriage to Edward Campbell in 1853.

Edward Fitzgerald Campbell, 2nd Bt, was the eldest son of Major-General Sir Guy Campbell CB (1786-1849), 1st Bt Campbell, and a great-grandson of the Duke of Leinster. He attended the Royal Military Academy, Sandhurst, before being appointed Second Lieutenant in the 60th, The King’s Royal Rifle Corps, on 2 July 1841, rising to the rank of Lieutenant on 26 July 1844. He served with the 1st/60th in India (1845-60) and was an aide-de-camp to General Sir Charles Napier, commander-in-chief in India (1849-50), and to Lord Dalhousie, Governor-General of India (1848-56). He was promoted Captain on 27 December 1850.

Edward Campbell’s father died on 26 Jan 1849 and Edward assumed the baronetcy. He married Georgiana (GG) Metcalfe, aged 23, the second eldest daughter of Sir Thomas Metcalfe, 4th Bt. (1795-1853), the civil commissioner and agent (resident) of the Honourable East India Company at the Imperial court of the Mughals in Delhi. Initially Sir Thomas was opposed to GG’s marriage as he thought Sir Edward was too impoverished to look after her. However he relented when GG, who was head over heels in love with Campbell, went on hunger strike.

The marriage of Sir Edward and GG took place at West Grinstead, Sussex, on 25 October 1853, only 10 days before the death of Sir Thomas, aged 58, on 3 November 1853 under mysterious circumstances. (It is alleged that he was poisoned by the Mughal queen, Zinat Mahal, in revenge for his part in the exclusion of her son, Jivan Bahkt, from heirdom to the Imperial title.)

Sir Edward was stationed at the Musketry Depot at Sialkot in the Punjab when the Indian Mutiny began on 10 May 1857. He went hastily to Simla where his wife, who was pregnant, was living for the sake of her health, . He was summoned to rejoin the 1st/60th, arriving on the ridge above Delhi by mail-cart on 3 July. He was given command of a company and distinguished himself in many skirmishes that took place against the rebels outside the city before the assault on Delhi was launched on 14 September.

After the recapture of Delhi Campbell was made a Brevet Major in the Army on 19 January 1858 and a Major at regimental duty on 9 September 1858. He was appointed Military Secretary to the Governor-General, Lord Canning, in 1859, and was promoted to the brevet rank of Lieutenant-Colonel on 18 September 1860 and to Colonel on 12 January 1867.

During his service in India Campbell took part in the Second Sikh War (1848-9), the Expedition to Kohat in 1850 and in the Indian Mutiny.

Sir Edward was placed on half-pay in the rank of Lieutenant-Colonel in 1870, with the honorary rank of Colonel, and retired from the Army in 1872. He died at his home at West Grinstead Lodge, Sussex, on 23 November 1882, aged 60, and was succeeded by his eldest son, the 3rd Baronet. 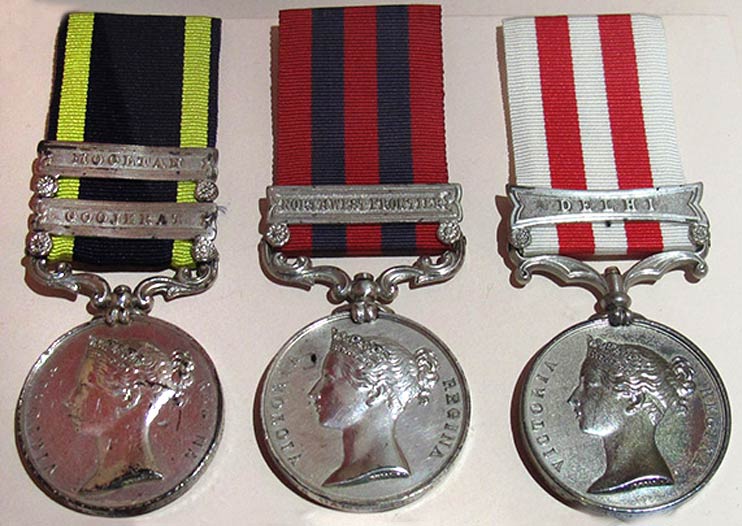