This object is a newly-acquired metal plate from what was almost certainly a wooden campaigning trunk or similar item belonging to Major-General Robert ‘Black Bob’ Craufurd of Peninsular War fame.

The significance of the name on the plate was recognised by Mr Freddie Taylor, a member of The King’s Royal Corps Association, when rummaging around a junk shop in Devon in 1997. He purchased it for £3 and has very kindly donated it to the Museum.

It was usual for officers on campaign to be accompanied by a certain amount of baggage which needed to be secured in sturdy trunks to survive the rigours of carriage by cart on rutted roads and tracks. Major-General Craufurd would have had one or more such trunks and other items of campaign camping equipment when in the Peninsula. 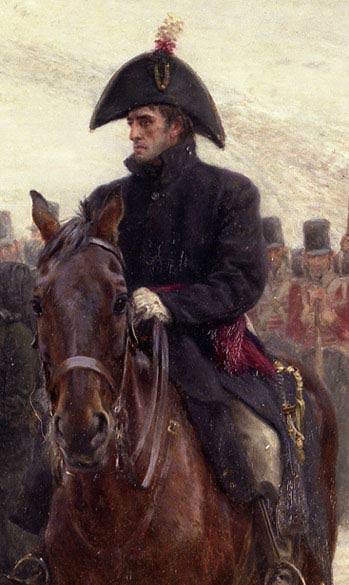 Major-General Craufurd. Detail from J.P. Beadle’s painting of ‘The Rearguard’.

As ‘Black Bob’ Craufurd was not promoted to the rank of Major-General until 4 June 1811 and died on 24 January 1812 after being mortally wounded in the assault on Cuidad Rodrigo on 19 January 1812, the plate was almost certainly manufactured in the intervening seven months. As, too, Craufurd remained in the Peninsula over this period the possibilities are that the plate was either made for him in theatre to replace an existing trunk plate or he commissioned a new trunk and plate to be sent to him from England.

The engraving on the plate is very clear with one corner bent down as a result of wear and tear.

Major-General Craufurd is best remembered for his command of a light brigade in Spain during the retreat to Vigo in January 1809, and his subsequent command in the Peninsula of a light brigade (1809-10) which formed the core of The Light Division which he commanded from the date of its inception by a General Order dated 22 February 1810 to his untimely death in January 1812.