September 25th 2014 marks the 70th anniversary of the death of Lieutenant Mike Sinclair, KRRC, who was killed attempting to escape from Colditz Castle. The object is the DSO he was awarded posthumously in recognition of his continual attempts to do his duty as an Officer and a Rifleman by escaping and returning to fight with his Regiment after being captured in Calais, May 1940. 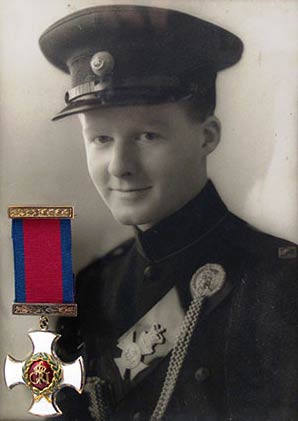 In all Mike Sinclair (left) made eight attempts to escape, four of them from Oflag IV C, the legendary Colditz Castle, set up to house persistent escapers, where he arrived in May 1941; because of his red hair he became known as ‘The Red Fox of Colditz’. His most well known attempt was in September 1943 when he impersonated the guard commander, an old Warrant Officer nicknamed ‘Franz Joseph’ because of his Hindenburg moustache. After six months of planning, suitably dressed, having mastered the mannerisms, speech and habits of ‘Franz Joseph’ Mike was so realistic as the guard commander that he was able to relieve one sentry and post a fellow POW in his place. Whilst relieving a second sentry, however, the alarm was raised, ‘Franz Joseph’ appeared and the attempt failed – but not before a blazing row had erupted between Mike and ‘Franz Joseph’ about who was the real guard commander!

On 25 September 1944 Mike Sinclair tried to repeat a successful French escape from the exercise area that PoWs were permitted to use under escort. He scaled the wire fence and ran off into the trees; several shots were fired, one struck him in the elbow and ricocheted into his heart killing him instantly. He is buried in the British Military Cemetery in Berlin. The London Gazette published the award of the DSO to Lieutenant AM Sinclair on 29 August 1946; it is believed to be unique being posthumous, to a PoW and a Lieutenant. Although he never made a ‘home run’ he spent more months of freedom in Germany and occupied Europe than any other PoW.

Educated at Winchester and Cambridge Mike Sinclair was a man of high ideals determined to get back to Britain and take up the fight against Germany. In May 1940 he was the Scout Platoon Commander in A Company 2 KRRC. The Battalion was part of an ‘ad hoc’ force sent to defend Calais as the Germans advanced on the channel coast and the British Expeditionary Force began to withdraw from Dunkirk but by 26 May, after several days of fierce fighting, Calais fell; Mike Sinclair was captured and began four long years of captivity.

In the early days of his captivity he made several escape attempts as he was moved through France and Germany to Fort VIII in Posen, Poland. It was from there, with two brother officers, that he successfully broke out of captivity by being concealed in a sack and deposited in a rubbish pit. He spent several months with the Polish underground in Warsaw after Operation Barbarossa, the German invasion of Russia, destroyed his hope of crossing safely into that country and being repatriated to England. On leaving Warsaw he travelled through Hungary, Yugoslavia and Bulgaria only to be caught almost within reach of Turkey 10 months since escaping from Posen.

In March 1942 he was moved to Colditz. His first escape attempt from there was in June 1942 when in Leipzig being treated for sinusitis he climbed out of the hospital lavatory only to be recaptured in Cologne after several weeks during a search for downed air crew. On 25 November 1942, dressed as a German he walked out of Colditz with a French Officer but was caught 15 miles from the Swiss border five days later. In September 1943, after six months of planning the Franz Joseph escape he again failed to get away. With Jack Best, a fellow British PoW, he escaped once more in January 1944 but was caught 22 miles from the Dutch border three days later. His last escape was the solo effort described above when he was shot and tragically killed.