This is a miniature portrait of Major William Davy who commanded the 5th Battalion, 60th Regiment, at Roleia, Vimiera and Talavera during the opening battles of the Peninsular War in 1808-9. 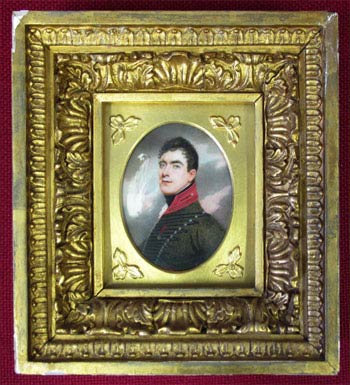 The miniature in its frame is 18 cms wide by 19.5 cms high. It is displayed in the Museum. There is no indication from the portrait of the name of the miniaturist, although an old label attributes it to an unknown artist called W. Hine. It is close in style to the work of John (Inigo) Wright (d. London 1820).

William Davy was born in 1780. He was educated at Eton and commissioned in the 61st (South Gloucestershire) Regiment in 1797. He became a Captain in the 5th/60th in 1802 and a Major in 1807, passing over the heads of thirteen Captains who were presumably too poor to purchase their promotion. He assumed command of the 5th/60th in May 1808. 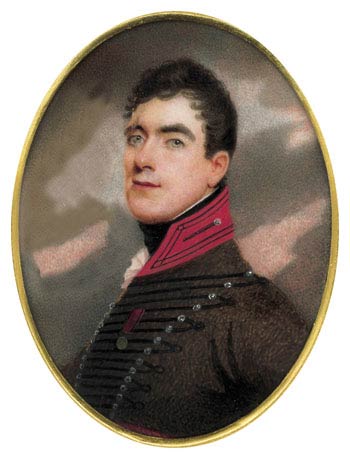 A close-up of the miniature.

On 12 July 1808 the Battalion embarked at Cork for the Peninsula and landed at Mondego Bay on 1 August, being the first unit ashore. The Battalion fought at Roleia on 17 August 1808 but thereafter was split with Wellesley (later Wellington) requiring the Battalion to provide at least one company to each brigade.

Following the defeat of the French in Portugal at Vimiera on 21 August and the Convention of Cintra, Davy made the mistake of enlisting 100 French deserters into the 5th/60th. They behaved so deplorably en route to join Sir John Moore’s army in Spain, with some deserting back to the French with intelligence of British dispositions that the 5th/60th was ordered to return to Lisbon and did not take part in Moore’s 1808-9 campaign in Spain. Davy then set about removing the offenders and restoring the efficiency of the Battalion. 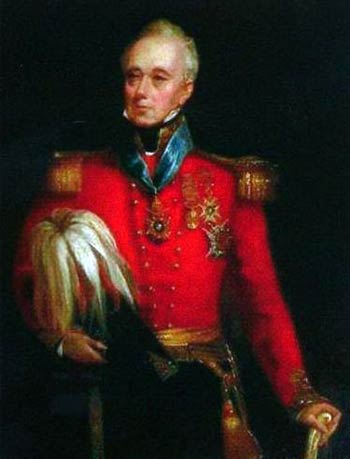 Portrait of Gen Sir William Davy after being created KCH.

By April 1809, when Wellesley returned to the Peninsula, his confidence in the 5th/60th was undiminished. Five companies were dispersed to brigades and the remaining five retained as a wing under Major Davy’s command. Davy’s wing, together with the 45th (Nottinghamshire) Regiment, excelled in preventing a French breakthrough on the opening day of the Battle of Talavera on 27 July 1809.

In December 1809 Davy was promoted to Lieutenant-Colonel and appointed to command the 7th Garrison Battalion in England. He never again went on active service.

Davy received a field officer’s Army Gold Medal 1808-14 for Roleia and Vimiera, with a clasp for Talavera. He was created a Companion of the Order of the Bath (CB) in 1815 and a Knight Commander of the Royal Guelphic Order of Hanover (KCH) in 1836. 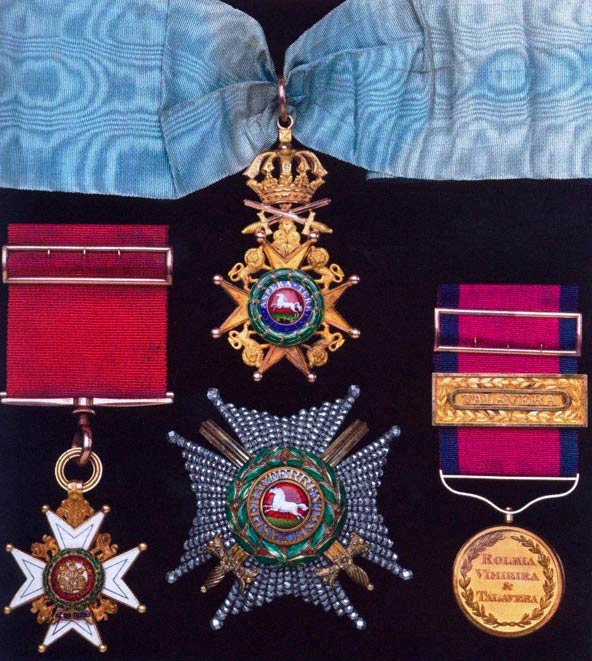