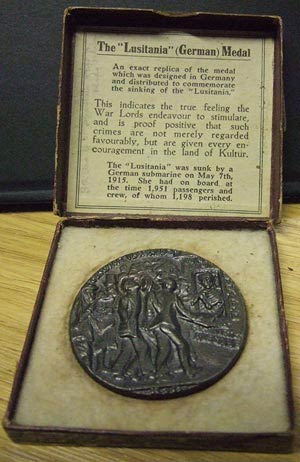 This object is one of 300,000 copies of Karl Goetz’s ‘Lusitania Medallion’ cast and distributed in England as part of an anti-German propaganda campaign following the sinking of the Cunard liner RMS Lusitania by a German submarine in May 1915. Original medallions made in Germany are very scarce. There is one on display in the Imperial War Museum and another in the British Museum’s collection.

At approximately 2.10 p.m. on Friday 7 May 1915 the RMS Lusitania (30,396 tons), with 1,951 passengers and crew on board, was off the south coast of Ireland on a return voyage from New York to Liverpool when she was hit amidships by a torpedo fired by the German submarine, U20. The ship sank within 20 minutes. 1,201 men, women and children perished, not 1,198 as initially thought, including 128 US citizens.

The sinking of the unarmed Lusitania was greeted in Britain with shock, anger and indignation, inspiring an abundance of anti-German propaganda and provoking a powerful emotional commitment in the US to the Allied cause, although it was still another two years before the US entered the war. Anti-German feeling was further exacerbated when a little-known Munich medallist called Karl Goetz privately cast and issued the original ‘Lusitania Medallion’. In doing so, he erroneously recorded 5 May 1915 on the obverse of the medallion as the date of the sinking. 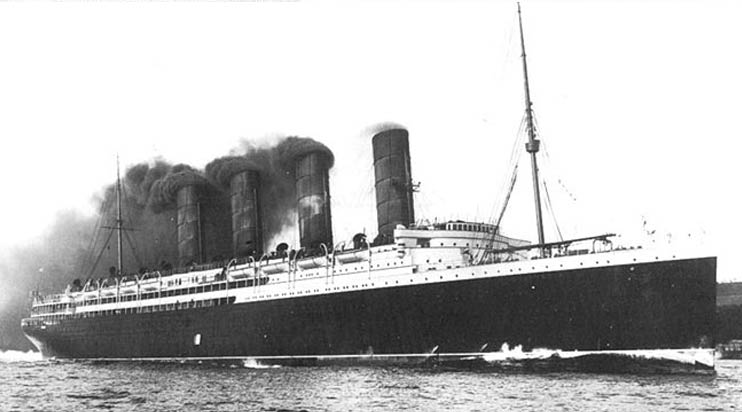 British intelligence was quick to exploit the date error as evidence that the fate of the Lusitania had involved advanced planning and that it was pre-meditated and pre-arranged. British intelligence was also happy to mislead public opinion further about the status of Goetz’s medallion stating that its introduction had been sanctioned as an official commemoration of the sinking which implied national approval for it.

British replicas of the ‘Lusitania Medallion’, such as the one on display in the Museum, were sold in an attractive cardboard presentation box for a shilling each, the proceeds being donated to St Dunstan’s Blinded Soldiers and Sailors Hostels and the Red Cross. The inside of the lid of the box bore 16 lines of anti-German propagandist text including the statement that the medallion was ‘proof positive that such crimes [as the sinking of the Lusitania] are not merely regarded favourably, but are given every encouragement in the land of Kultur’.

Goetz’s original medallions were 56.5 mm in diameter and between 2-3 mm thick. The obverse depicts the stricken Lusitania sinking, her stern submerged, while her bow, supposedly laden with armaments, rises clear of the water. This depiction is contrary to eye-witness accounts which stated that the ship went down bow first. The text around the upper edge, ‘Keine Bann Ware!’, translates as ‘No Contraband Goods!’. The text at the bottom of the obverse translates as ‘The liner Lusitania sunk by a German submarine 5 May 1915’. The reverse of the medallion shows Death, in the form of a skeleton, issuing tickets to passengers behind the ticket office counter of the Cunard Line in New York.

Much of the background information above originates courtesy of the Imperial War Museum. 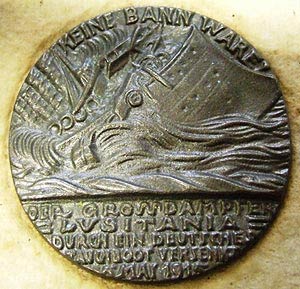 The Obverse of the Medallion. 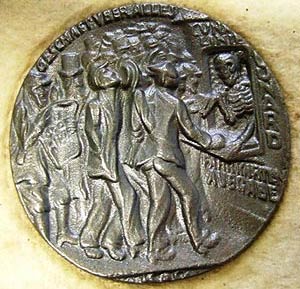 The Reverse of the Medallion.