Letters and Photographs of Bandsman Holmes

This month we have been looking at a collection of recently donated items relating to Bandsman Albert Holmes who served with the 1st Battalion, Rifle Brigade. Bandsman Holmes was among those captured at The Defence of Calais in May 1940. The items include a set of letters and postcards written by Albert and his fiancé Iris to each other during the period of 1940 – 1945 while Albert was a prisoner of war. 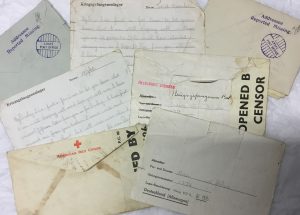 One of the earlier letters from Iris is dated 5th August 1940 and is addressed to the Officer in charge of records. She asks for information regarding Albert as she has not had any news from him for eight weeks. On the reverse of her letter is her reply, which must have been heart-breaking to read, “I regret to inform you that Bandsman Holmes was reported missing in the Defence of Calais 26.5.40 and since that date no further news has been received”.
Around the same time, letters from Iris to Albert have been returned with a hastily scribbled, “Missing”, on the envelopes.

Albert, along with many of those he served with, was taken as a prisoner to Stalag VIIIB in Germany. For the next five years, he and iris regularly exchanged letters and photographs. Despite the situation they found themselves in and in the horrendous events Albert must have endured, their letters remain positive, filled with what must have been welcoming snippets of everyday life. For Iris this was news of her dog and the mischievous things he had been getting up to – “I had a ball of wool on my dressing table…..and the little rascal got it down somehow, you never saw such a mess…..”, news she had from Albert’s parents and her hopes of them being reunited soon. For Albert it was news of how his music playing was coming along, how he hoped Iris’s manager was not loosing his temper too much and how he hoped “…this rotten lot finishes soon, so we can get married…”
In one of the later letters written by Albert to Iris, dated 21st April, 1945, nearly five years since he was taken prisoner at Calais, he writes “We are all ready to come home now, we are only waiting for planes, so in a few days we should meet again….so be prepared for a holiday….”. 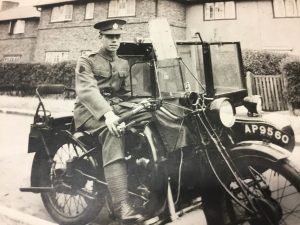 Freedom – Bandsman Holmes on his motorcycle

At the end of every letter and postcard in this collection both Albert and Iris sign off ” From your ever loving sweetheart”.
Unlike many others Albert and Iris were reunited after the war. Among those who fought at The Defence of Calais, 300 British troops were killed and 700 wounded. Of these 200 Green Jackets died. Over 2,000 soldiers faced the rest of the war in prisoner of war camps.
We are most grateful for the donation of these documents.