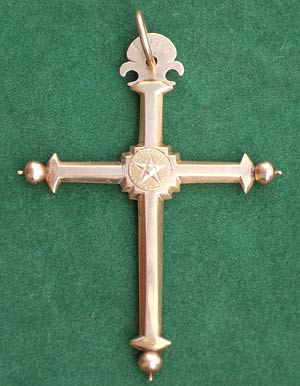 The gold cross belonged to Lieutenant-General Sir John Moore. After his death at the Battle of Corunna on 16 January 1809 it passed into the ownership of his sister, Jane Moore, who later gave it to Mrs A. Yonge of Puslinch. The Yonge family have retained possession of it ever since. The cross is presently on loan to the Museum and is on display together with other items once belonging to Sir John Moore.

Sir John Moore was born on 13 November 1761 and in 1776, at the age of fourteen, was gazetted an ensign in the 51st (2nd Yorkshire West Riding) Regiment. A year later he transferred to the newly-raised 82nd Regiment, serving as a company commander during the American War of Independence and being placed on half-pay when the Regiment was disbanded in 1783.

In 1784 Moore became a Member of Parliament (until 1790). In January 1788 he was appointed a major in the 60th (Royal American) Regiment, an antecedent regiment of The Royal Green Jackets, before exchanging nine months later to his original regiment, the 51st, which he commanded in Ireland and Gibraltar from 1790-94. Thereafter, he assumed more senior appointments on active service in Corsica, the West Indies, Ireland, the Helder (Netherlands), the Mediterranean and Egypt. 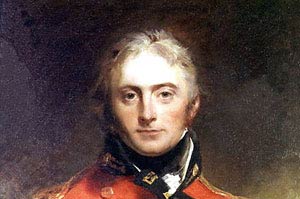 On 8 May 1801 Moore was appointed Colonel of the 52nd (Oxfordshire) Regiment, another antecedent regiment of The Royal Green Jackets, ensuring, two years later, that his regiment was the first to be designated Light Infantry. In 1802 he assumed brigade command in the south of England and in 1803 established a training camp for the 95th Rifles, 52nd Light Infantry and, from 1804, the 43rd Light Infantry at Shorncliffe in Kent – Moore’s celebrated light brigade. He was knighted in 1804 and became a lieutenant-general in 1805.

Moore left England in 1806 for service in the Mediterranean and, in 1808, in Sweden, before commanding an army of 35,000 men in northern Spain. His army, which included the light brigade so successfully trained at Shorncliffe, advanced deep into Spain before retreating to Vigo and Corunna, where he was mortally wounded in battle against the French. He was buried where he died, his personal possessions being recovered and forwarded to his family.