This rather unusual object is the false arm used by Lieutenant-General Sir Walter Congreve VC KCB MVO (The Rifle Brigade) to replace his left hand which was amputated after he was wounded at Vimy Ridge on the Western Front in France in June 1917.

The false arm is on display in the Museum alongside Sir Walter’s orders, decorations and medals and the medals of his son, Brevet Major W.La.T. (Billy) Congreve VC DSO MC (The Rifle Brigade). Sir Walter and his son, Billy, provide the only instance of a father and son in the same regiment being awarded Victoria Crosses. 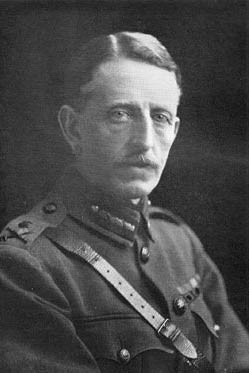 Walter Congreve as a Lieutenant-General.

Walter Congreve, known in The Rifle Brigade as ‘Squibs’ because of his ancestral connection to Sir William Congreve (1772-1828) of Congreve rocket fame, was born on 20 November 1862. After attending Harrow School, he spent two years at Pembroke College, Oxford, before entering the Royal Military College, Sandhurst, where he shared rooms with Douglas (later Field Marshal Earl) Haig. On completion of his time at Sandhurst he was commissioned as a 2nd Lieutenant in The Rifle Brigade on 7 February 1885.
After commissioning, Congreve spent a number of years serving at regimental duty including in India. At the outbreak of the South African War in 1899 he was the District Musketry Officer at Aldershot but immediately gave up the post in order to join 2nd Battalion, The Rifle Brigade (2 RB), in South Africa. However, by the time of his arrival at Durban on 23 November, 2 RB was already besieged as a part of General White’s force at Ladysmith. Being at a loose end, he was attached to the staff of 4 Infantry Brigade, and then to General Buller’s Headquarters as a press censor.

On 15 December 1899, Congreve together with others, including Lieutenant the Hon. F.H.S. (Freddie) Roberts of The King’s Royal Rifle Corps, took part in a gallant attempt to rescue the guns of the 14th and 66th Batteries, Royal Field Artillery, at the Battle of Colenso. Two out of twelve guns were recovered. 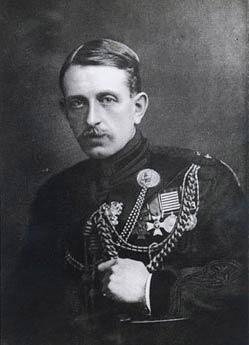 Congreve, Roberts and five others were awarded Victoria Crosses (see Focus on Courage: The 59 Victoria Crosses of The Royal Green Jackets by Lieutenant-General Sir Christopher Wallace and Major Ron Cassidy (2006), available from the RGJ Museum shop, for a full description of the action.)

At the start of the First World War Congreve was commanding 18 Infantry Brigade at Lichfield in Staffordshire. He proceeded with his Brigade to France and on 18 February 1915 was promoted to command 6th Division. In November 1915 he assumed command of 13 Corps. It was while he was in command of the Corps in June 1917 that he lost his left hand. An officer who was with him at the time later wrote:

“When W.N.C. was wounded we had just visited a Brigade Headquarters, and we were strolling down the eastern face of the Vimy Ridge on to the plain below to visit one or two Batteries situated a quarter of a mile in front of the Ridge. We went along a track on the grass. I had noticed that the Boche had dropped a couple of shells on the track just before, and I remarked to W.N.C. that it might be as well to walk to the side. Naturally he paid no attention, and within a minute we heard the rush of two shells and the business was done. He went down – quite a useless thing to do! – and so did I.  When the bang came I rolled – quite uselessly – into a small hole, then got up and didn’t see him. He had been knocked into a big shell hole about five yards away, and was lying nursing the very bad wound in his wrist. I ran as fast as I could to the nearest Battery, and got two men and a stretcher, and we went back with W.N.C. to the nearest road, the Battery having meantime telephoned for a car to meet us. W.N.C. didn’t like the stretcher, and insisted on walking. He was quite silent till just before we got to the dressing-station, when he handed me back my handkerchief which I had tied roughly round his wrist and apologised for making it in such a mess! Just as he got out of the car he reeled and nearly fainted, and that was the first sign he showed of having felt anything. He was operated on at the nearest Casualty Clearing Station almost at once, the shattered remnants of his left hand being amputated. Within an hour he was sitting up in bed dictating a letter about a ‘missing’ man.” [Source: The Congreves by Lieutenant-Colonel L.H. Thornton CMG DSO, late The Rifle Brigade, and Pamela Fraser (1930) p. 177.]

After a period of convalescence in England, Congreve returned to France in January 1918 to command 7 Corps and, in April 1918, 10 Corps. Matters, however, did not go well for him during the German offensive at that time and on 15 May, following a reorganisation of the armies in France, he was ordered home. Field Marshal Haig, with whom he had shared rooms at Sandhurst, refused to see him before his departure.

After the war Congreve was appointed to command the British Forces in Egypt and Palestine. Promoted General on 25 November 1922 he returned to England to take over Southern Command at Salisbury in April 1923. In June 1924 he became Governor of Malta and died in post at Valetta on 28 February 1927, aged 64. He was buried at sea on 4 March 1927 between Malta and Gozo in what is now called the Congreve Strait.

Congreve was widely considered “a fighting general” who “infinitely preferred walking out in full view and quite close to the enemy than anything else. He simply asked for trouble.” He was the only corps commander to be wounded during the First World War.

Congreve was much affected by the loss of his eldest son, Billy, who was killed on 20 July 1916 while serving as Brigade Major, 76th Infantry Brigade, during the Battle of the Somme. Billy was the first officer during the First World War to be awarded a Victoria Cross (for gallantry during the fourteen days preceding his death) having already been awarded the Distinguished Service Order (1916) and a Military Cross (1915).

The recovery of the guns at Colenso, 15 December 1899, by John Charlton,
following which Walter Congreve was awarded a Victoria Cross.