The PDSA Dickin Medal awarded in 1949 to a black Egyptian mongrel bitch terrier called ‘Tich’ for loyalty, courage and devotion to duty under hazardous conditions of war between 1941 and 1945 while serving with 1st Battalion, The King’s Royal Rifle Corps (1 KRRC), in North Africa and Italy. It is the only Dickin Medal owned by the Museum.

On 24 April 2009 a Dickin Medal awarded to ‘Rip’, a homeless stray dog who became a Second World War hero by saving the lives of 100 air-raid victims during the Blitz, fetched £24,250 at auction. 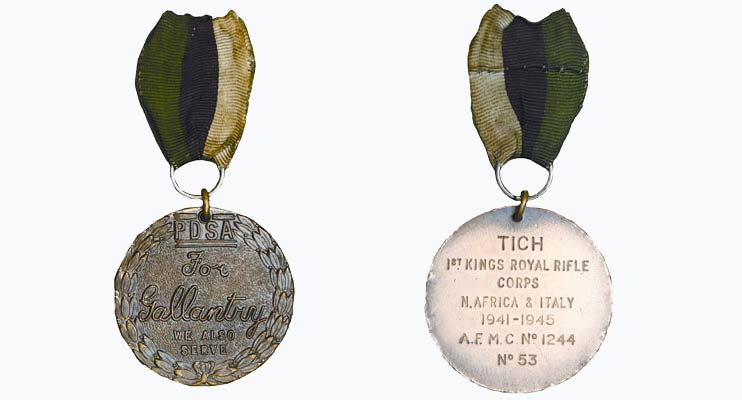 PDSA’s founder, Maria Dickin, introduced the PDSA Dickin Medal in 1943. It is awarded to animals displaying conspicuous gallantry and devotion to duty while serving or associated with any branch of the Armed Forces or Civil Defence units, and is the animals’ equivalent to the Victoria Cross.

The medal, which is made of bronze, is embossed with the words For Gallantry and WE ALSO SERVE. The reverse is inscribed with details of the recipient. It is suspended from a ribbon of dark green, dark brown and pale blue, symbolic of the naval, military, civil defence and air forces. To date (1 May 2009) there have been 62 awards of the PDSA Dickin Medal to 32 pigeons, 26 dogs, three horses and one cat.

‘Tich’ was adopted by 1 KRRC during the fighting in the Western Desert in 1941. When the Battalion reached Algiers in 1943, ‘Tich’ was placed in the care of Rifleman Thomas Walker, accompanying him on the front line usually on the bonnet of a Bren gun carrier or stretcher jeep.

During the fighting in Italy Rifleman Walker, a ‘medic’, was awarded the Military Medal for a number of actions in which he either rescued or tended to injured men while under fire. On every occasion ‘Tich’ remained by his side, being wounded on a number of occasions, once very seriously.

Newspaper reports described ‘Tich’ as the brave dog of an outstandingly brave man. In recommending ‘Tich’ for the Dickin Medal, 1 KRRC’s commanding officer, Lieutenant-Colonel E.A.W. Williams, wrote: ‘Her courage and devotion to duty were of very real and considerable value and her courageous example materially helped many men to keep their heads and sense of proportion in times of extreme danger. The sight of her put heart in the men as she habitually rode on the bonnet of her master’s jeep and refused to leave her post even when bringing in wounded under heavy fire.’

The Battalion’s Chaplain also said of ‘Tich’ that: ‘She can leap on to any type of truck or vehicle, will howl like a wolf, will cry, will remain standing against a wall until told to move. She will also smoke cigarettes, and never eat or drink until ordered to do so by her owner.’

During her life ‘Tich’ gave birth to 15 puppies. After the War she lived with ex-Rifleman Walker in Newcastle, taking part with him in fund-raising activities for PDSA.

‘Tich’ died in 1959 and is buried alongside many other PDSA Dickin Medal recipients in the charity’s pet cemetery at Ilford.