The seal is one of a number of items relating to the Crosse family donated to the Museum following the death of Lieutenant-Colonel R.B. Crosse DSO*, formerly of The Oxfordshire & Buckinghamshire Light Infantry, in 1970.

Richard Crosse was born in 1888. He was commissioned in The Oxfordshire Light Infantry in 1906 and joined the 2nd Battalion (52nd) (the Regiment became The Oxfordshire & Buckinghamshire Light Infantry in 1908). He was promoted Lieutenant in 1909 and in March 1913 became Adjutant of the 52nd. He was promoted Captain in May 1915, remaining Adjutant until February 1916.

On 3 June 1916 Crosse was appointed a Brevet Major and on 8 July assumed command of the 52nd, aged 28, in a meteoric rise that took him from the rank of Lieutenant to Lieutenant-Colonel in little over a year.

Crosse proved an outstanding and brave commanding officer, highly regarded by his superiors and much loved and respected by his men. He fought in all but two of the 28 major battles in which the 52nd were engaged in the First World War. He never left the Battalion, except for leave, until he was wounded on 23 August 1918. He rejoined on 2 October.

Crosse was awarded a DSO in January 1915 and a bar to the DSO in February 1918. He was mentioned in despatches four times and appointed a Chevalier of the French Legion of Honour in 1917. He remained in command of the 52nd until June 1919. He retired from the Army in 1923 and joined the Ulster Special Constabulary in the following year. 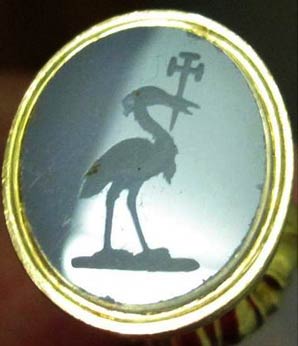 Base of the seal.

Crosse’s father, Captain R.L. Crosse, and two of his uncles, Lieutenant-Colonel C.K. Crosse and Captain A. T. Crosse, served in the 52nd during the 2nd half of the 19th century. Charles Crosse is especially well remembered for his actions during the Indian Mutiny when, as a Captain, he swiftly replaced a wounded officer at the head of the 52nd’s storming party at the Kashmir Gate and became the first officer to enter Delhi on 14 September 1857.

An earlier relative of the Crosse family, Lieutenant-Colonel John Crosse, served with the 52nd during the Peninsular War and at Waterloo, receiving the Military General Service Medal (1793-1814) with 10 clasps and the Waterloo Medal, and being made a Knight of the Royal Guelphic Order of Hanover (KH). 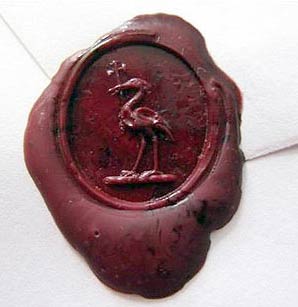 Wax impression of the seal.