A cornet played by a man who lost his left arm and the thumb on his right hand in an act of extreme gallantry during a vicious encounter with rebels in the latter stages of the Indian Mutiny in October 1858. 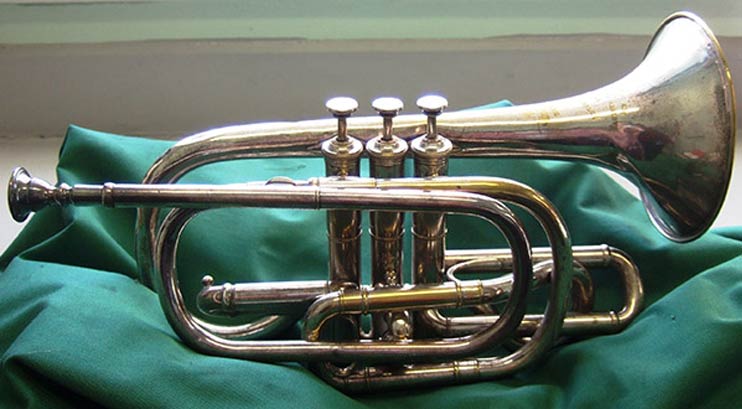 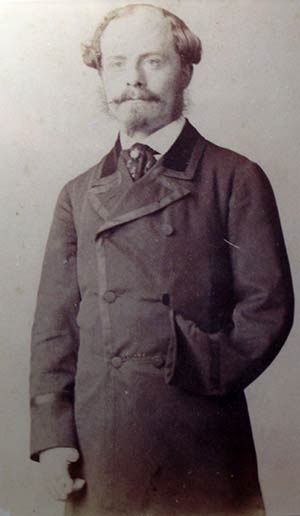 On 8 October 1858 a party of 100 men from the 3rd Battalion, The Rifle Brigade, under the command of Lieutenant Andrew Green encountered a large force of rebels some 40 miles from Lucknow. In the thickness of the jungle three men got separated and were surrounded and wounded. Hearing firing, Lieutenant Green at once made for the place and was immediately surrounded by six rebels. He shot two with his revolver. As he was in the act of dismounting from his horse to attack the others, he was cut down and hacked at while on the ground. Springing to his feet, he managed to knock down two more of his assailants with the butt of his revolver and drawing his sword, he kept the others at bay.

While he was about to fall back in search of his men, Green was attacked by three more of the enemy and a second time cut down. Again getting to his feet, he contrived with his wounded right hand to shoot another man who was in the act of cutting at him with his tulwar and whose blow, descending as he fell dead, inflicted a deep wound on Green’s head.

Help then arrived. Green was by this time lying on the ground bathed in blood. He had received 14 sabre cuts and one gunshot wound and, although he was to lose his left arm and right thumb, miraculously he survived. He did, however suffer extreme deafness in later life as a result of his wounds, using pencil and paper to put his questions to others and obtain answers.

In this action Green managed to save all his men from death. He was mentioned in despatches and thanked by the Governor-General for his bravery. On 4 August 1863 he was promoted to Captain and on 12 July 1864 became a Brevet Major. On 13 November 1870 he was placed on half-pay and appointed Captain of Invalids at The Royal Hospital, Chelsea. He became a Brevet Lieutenant-Colonel on 1 April 1874 and retired with the Honorary rank of Colonel on 1 July 1881. He died at The Royal Hospital on 21 March 1902, aged 65.

Despite his disabilities Green is remembered as a man ‘of the cheeriest disposition and most contented nature [who] well deserved the pseudonym of “Jolly” Green which he bore in and out of the Regiment and throughout the Service for nigh fifty years’ (Obituary, 1902 Rifle Brigade Chronicle). It is perhaps unsurprising therefore, that he should have owned a cornet, now on display in the Museum, and to have held and played it successfully with the four remaining fingers on his right hand.