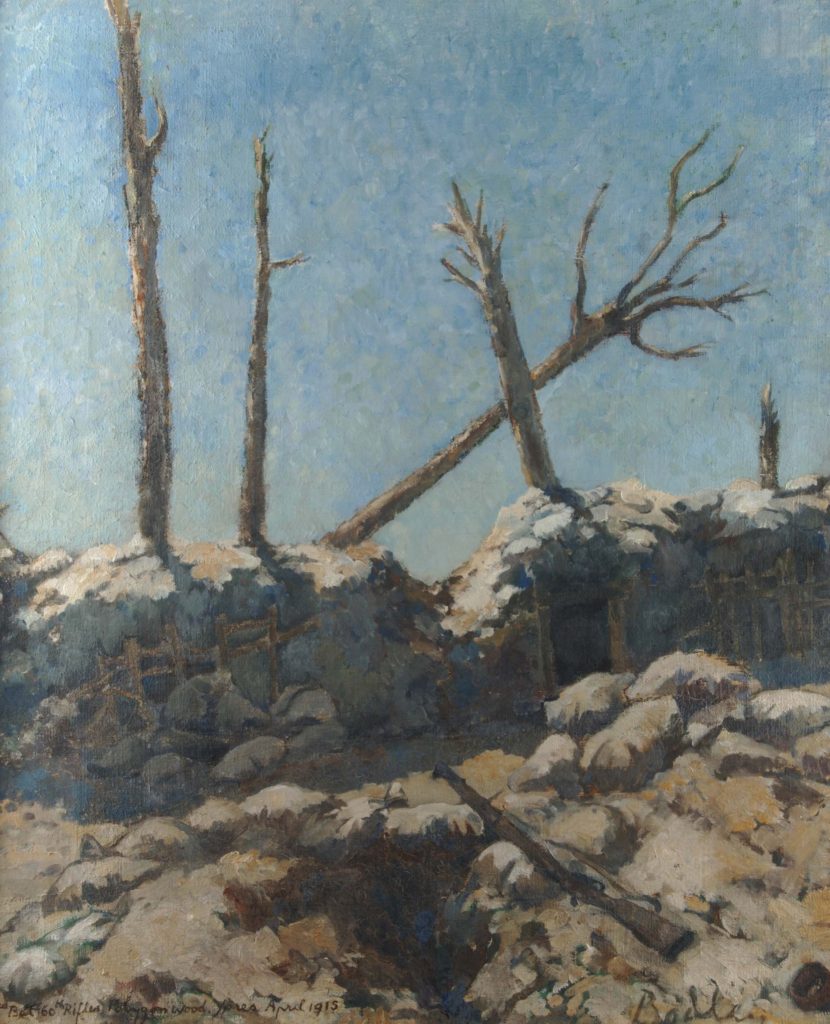 This artwork, one of two oil paintings by Josselin Bodley in The Royal Green Jackets (Rifles) Collection, captures the aftermath of the action at Polygon Wood near Ypres with the destruction of the landscape on a tranquil spring day.

Josselin Reginald Courtney Bodley, son of the historian J.E.C Bodley, was born in 1893. After attending school at Eton he wished to move to France to pursue his ambition to be an artist. However, with the outbreak of war his plans went on hold. Bodley was commissioned into the 6th Battalion King’s Royal Rifle Corps as a Second Lieutenant on 10th August 1914. The 6th battalion was one of two Special Reserve battalions which supplied officers and other ranks to those battalions serving on the front line. Bodley arrived in France on 2nd March 1915 and joined the 3rd Battalion King’s Royal Rifle Corps at St. Eloi, eight kilometres north west of Arras. 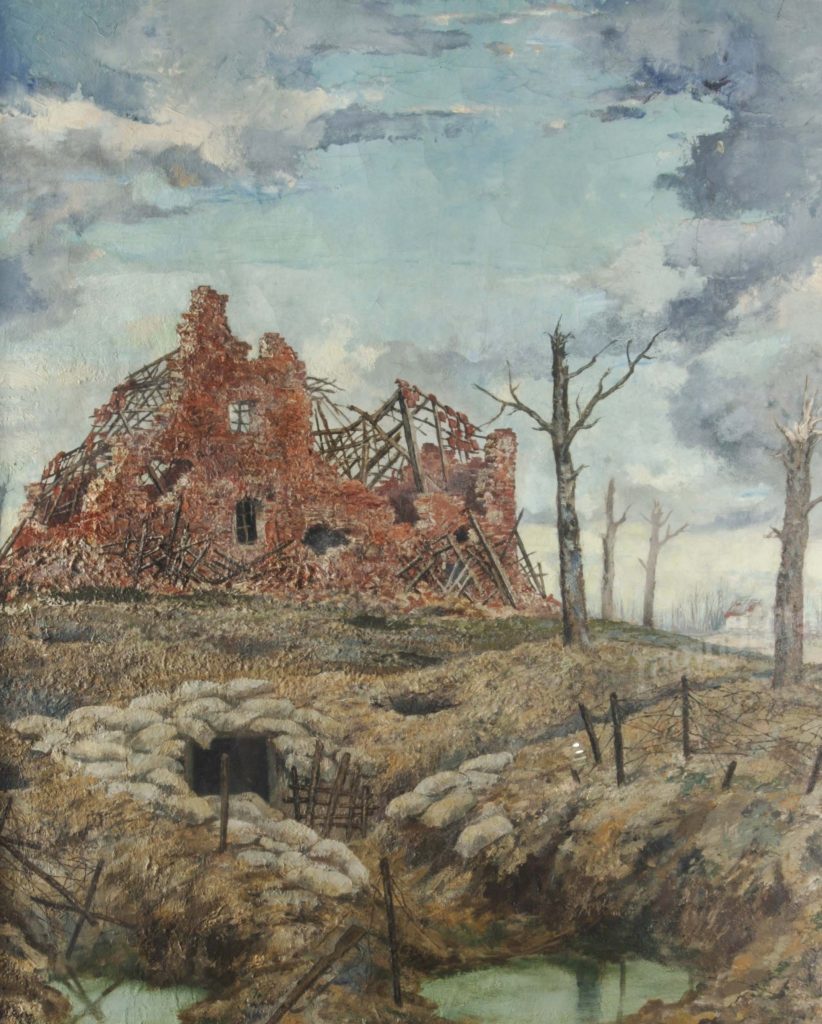 It was here that Bodley worked on a painting of the battalion headquarters at Shelley Farm. The area surrounding St. Eloi had come under bombardment from heavy artillery during March 1915. The painting depicts the remains of a building standing amid the filled trenches and the trunks of trees stripped of their branches.
The third battalion moved to the Ypres area toward the end of March 1915 and took part in the action known as the second Battle of Ypres. The War Records from the 1915 King’s Royal Rifle Corps Chronicle describe the scene –

‘On April 19th the Battalion was completing a rest period of three days in some huts at Vlameringhe, about three miles west of Ypres. This day marked the beginning of the battle known as the second Battle of Ypres, which town the Germans started shelling with 17in. howitzers on that day. It was our turn to go up to the trenches on April 20th, and to avoid the town the Battalion marched up to Polygon Wood (some five miles east of Ypres), where we were relieved by the 2nd K.S.L.I.
The trenches were good, and on the whole, the Germans were quiet, and in addition, we were blessed with the most perfect weather. This peace was first disturbed by a terrific bombardment on our right about two miles distant around Hill 60. This was not the original attack made by the British on Hill 60, as that took place a few days previously, but it was a subsequent development. From this time onward the Germans shelled the whole of the salient intermittently with shells of every calibre. We were particularly worried by a high velocity anti -aircraft battery, which shot with extreme accuracy, and caused us many casualties. Also owing to the position of our trenches, which faces due south, the enemy was able to enfilade the whole of our line.’

The 3rd Battalion remained a Polygon Wood until May 3rd when they retired to the eastern edge of Bellewaarde Wood.
Josselin Bodley was wounded later that year whilst with the 9th Battalion. After the war he lived in France and continued to paint, inspired by the French architecture and landscape. The two works on display in The Royal Green Jackets (Rifles) Museum were donated by the artist’s widow following his death in 1974.