The ‘With the Rifles to Waterloo’ temporary exhibition marking the bicentenary of the battle ended at the end of September. A small number of loan items are being returned and the exhibition is now permanent. Visitors before and after 30 September will barely notice the difference. All the key features remain, including the much-admired Waterloo diorama.

During the six months that the temporary exhibition was open, the Museum enjoyed a 41% surge in visitors. The Museum has now received 13,327 visitors in the first nine months of 2015, more than in the whole of 2014. Admission income has increased by 83% and shop turnover by 67%.

These are hugely encouraging results and a great fillip for the small number of staff and volunteers who have helped to make the exhibition so special. If you have not yet seen it, you should. For further information see below or contact the Curator at curator@rgjmuseum.co.uk 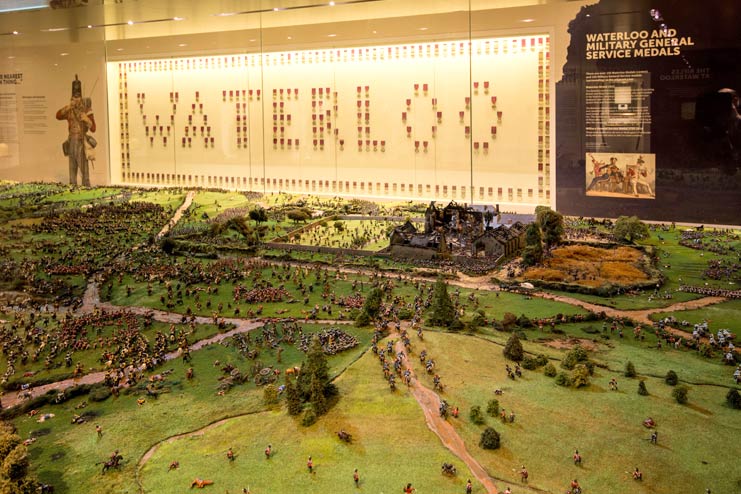 The Waterloo Exhibition is open every day except Sundays between 10 a.m. and 5.0 p.m. (last entry at 4.15 p.m.). The exhibition has been part-funded by a £100,000 Heritage Lottery Fund grant. It is a condition of the grant that the exhibition will remain in place until at least 2020. 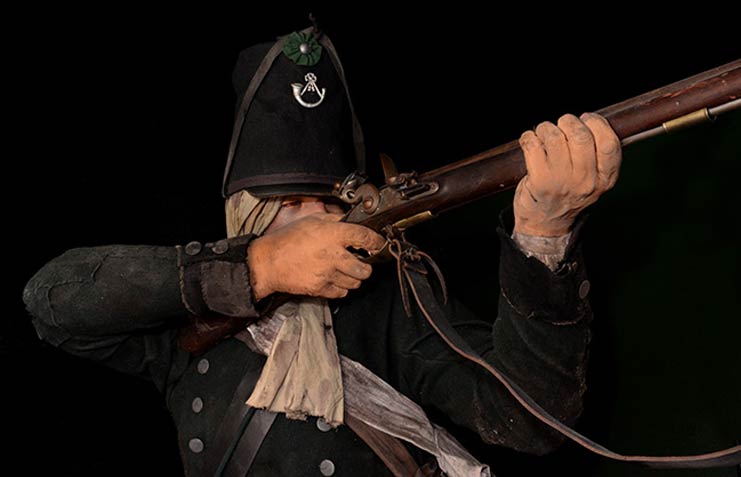 Life size model of Rfn Harris in action with a Baker Rifle.

Titled ‘With the Rifles to Waterloo’, the exhibition examines the causes, course and consequences of Emperor Napoleon’s rise to power from 1789 through to 1814, the Hundred Days following his escape from Elba, and his eventual defeat at the hands of the Duke of Wellington and his Allies at the Battle of Waterloo on Sunday, 18th June 1815. 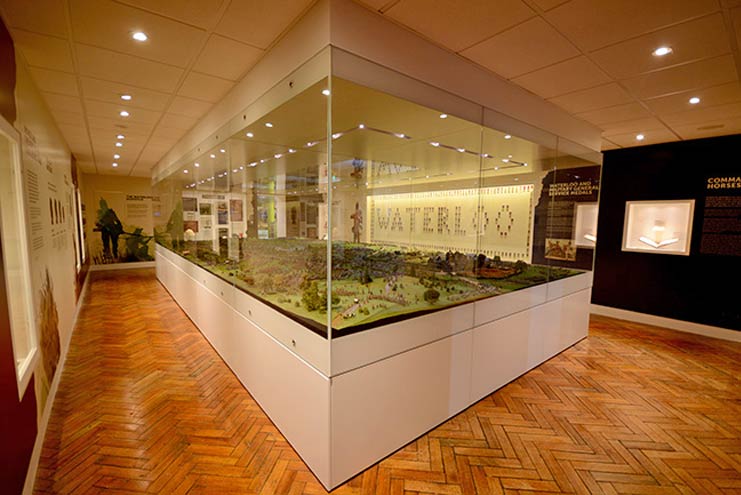 The cleaned and refurbished model of the battlefield in its new air conditioned case.

The centrepiece of the exhibition is a huge 25 square metre diorama of the battlefield of Waterloo with over 30,000 model soldiers and horses. An explanatory sound and light commentary, narrated by Kate Adie, brings the battle to life in a manner which greatly impresses our visitors who have invariably seen nothing like it before.

Expert conservators, Kelvin and Mary Thatcher, spent five months painstakingly removing 45 years of accumulated dust from the diorama in preparation for the exhibition. They cleaned and, where necessary, restored and repainted every figure by hand in their Norfolk workshop. During their work they were amused to find a model-maker’s prank amongst the battle – a British soldier laughing whilst urinating against a tree. There are many other portrayals on the diorama of key, as well as light-hearted, moments affecting individuals during the battle. 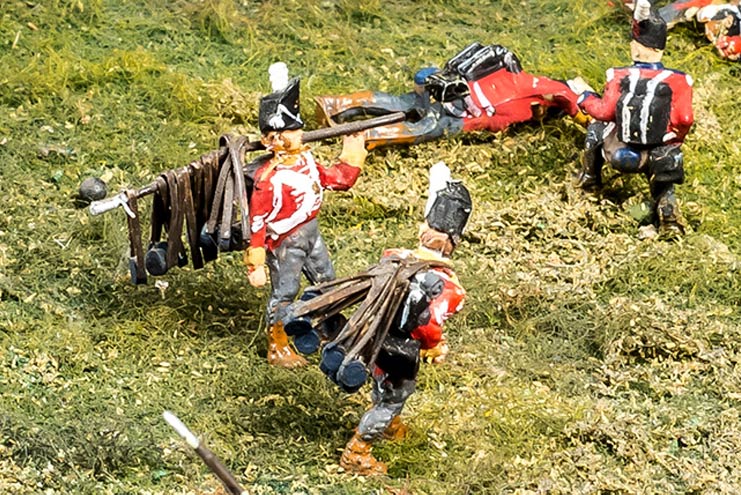 Detail from the model: Serjeants Morris and Burton carrying the canteens with the Gin ration with which they drunk themselves senseless so missing the battle.

Two of the antecedent regiments of The Royal Green Jackets, the 52nd Light Infantry and the 95th Rifles, played leading parts in the Battle of Waterloo, each with over 1,000 men. Each was awarded the battle honour ‘Waterloo’ in recognition of their courage and achievements on the battlefield. Generations of officers and soldiers in these regiments, The Royal Green Jackets and now The Rifles have since been brought up to revere and take pride in the part played by their predecessors at Waterloo. The battle honour ‘Waterloo’ was emblazoned on the cap badge of The Royal Green Jackets and today adorns the belt badge of The Rifles. 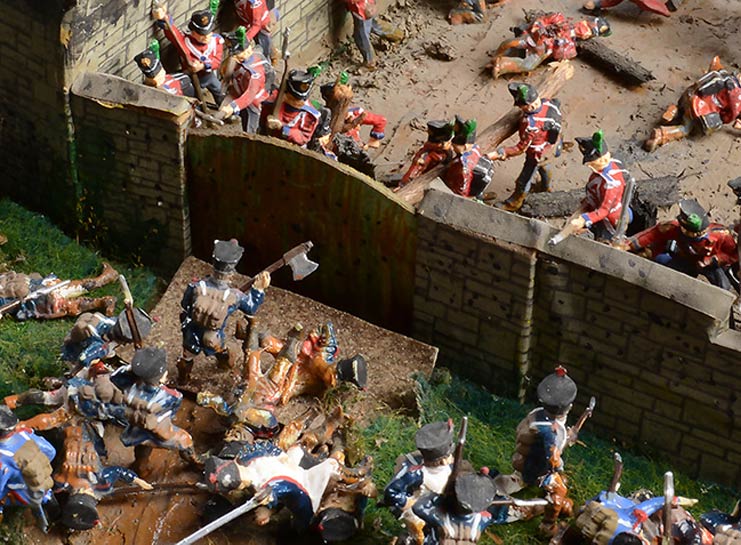 Detail from the model: The French try to storm the gate at Hougomont Farm.

Commenting at the opening of the exhibition on 25 March 2015, the Chairman of the Museum’s Trustees observed that: ‘This is an exciting, new exhibition with hands-on displays and information that will interest all the family – children, parents and grandchildren, all of whom we encourage to visit as a group. We hope that it will inspire them and our other visitors to learn more about what was a defining moment in our nation’s history, and that all our visitors will depart having thoroughly enjoyed their time at the Museum and having experienced a visit second to none. In particular’, he said ‘why travel to Belgium when you can see the battlefield laid out before you in Winchester?’ 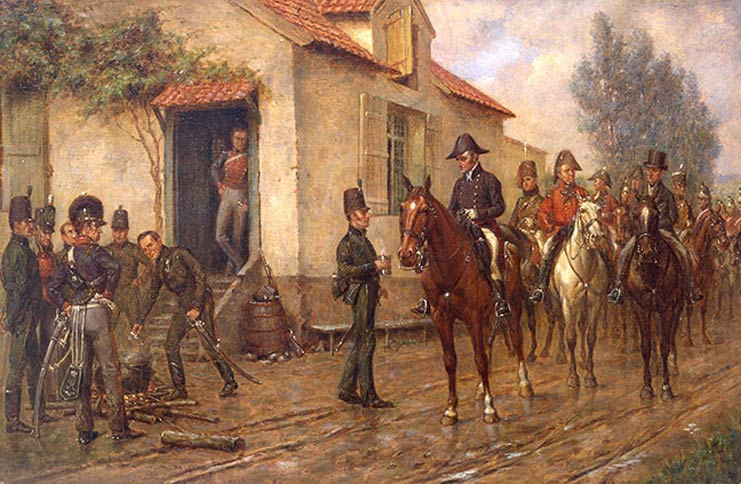 The morning of Waterloo.